Tonight, we do something that we have never done here before at GilbertSpillsIt:  taste a current release seasonal beer against one from the previous year.  Last year, after writing a review of the 2012 release of Highland Brewing's Cold Mountain, I bought a 22oz bottle of the beer to squirrel away.  You can see my review of last year's release here.  I brought it out to taste against the current iteration.

Last week, Highland released the 2013 Cold Mountain, and I grabbed a couple of bombers before they hit the sales floor (what can I say, membership has its privileges).   Tonight, I decided to taste them side by side.  I've never done an aged beer tasting before,  As you might expect, my level of patience, when it comes to beer is significantly shorter than when it involves wine.

I helped host a tasting a good six or eight months back with the brand rep from Highland, and I told her of my intentions to do a 2012 vs. 2013 Cold Mountain tasting.  She told me "Well, it's not really made for that."  I guess what she was trying to communicate was that they didn't make the beer in a style to withstand periods of cellar aging (which most beers aren't, but some are).  She kept telling me to "go home and drink it tonight."  I ignored her.  Here's the results. 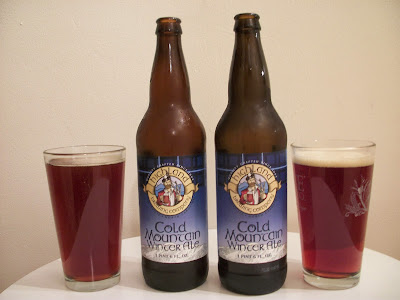 On the left, the 2012, on the right, the 2013.    As you can see, the packaging is identical, and the color of the beers is extremely close.  The main difference between the two is that the older beer show a slighter degree of turbidity and haziness.  The 2012 has a slight bit of sediment at the bottom of the bottle.

When poured, the 2012 had a slightly less active head, and what little was there diminished more rapidly, and left less lacing.   The 2013 had a much more active head, left greater lacing, and persisted longer.  Both gave a satisfying hiss of escaping gas when opened.

2012:  There are dark notes of cold coffee on the nose; despite the relatively light brown/ copper coloration, this smelled much darker, deeper and danker than it looked.   There's a good bit of toasty nut character, and a strong hop bitterness comes through on the finish.    Almost a bit of metallic steeliness.  Because these were large-format bottles, there was a LOT more turbidity when the second portion of the bottle was poured into the glass.

2013:  The fruit and spice notes come through more on the nose.  Lovely red tinged amber coloration.  This seems much lighter and fresher on the palate than its older brother.  As the brand rep said "it's not made to be aged", and this shows that.  This beer simply displays much FRESHER than its older brother.  There are more subtle fruit notes, spice notes, and it is not dominated by the "cold-coffee" character that rules the 2012 vintage. 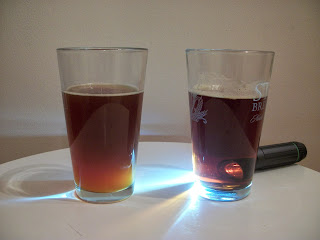 I can't say that there's any extensive difference, or especially, improvement, when this beer is aged for a year.  Optically, the major difference is in turbidity.  The 2012 showed considerable haziness over the 2013, especially when viewed with the assistance of a flashlight (older on the left, younger on the right). Yeah, I know it isn't a professional lighting job, but hey, I do what I can.  Flavorwise, it does drop off a bit with time, but not into the realm of unpleasantness.  The 2012 was still quite palatable, still very enjoyable.  .

All in all, I'd have to say, drink this while it is young.  It can take a year of cellaring, but it isn't optimal.  For a beer that advertises cranberry, raspberry, hazelnut and vanilla adjuncts, it is pretty subtle for a winter warmer.