I've been fielding calls all week from the beer drinking public wondering when this will get in.  (If you are curious about my relationship with highly allocated seasonal beers, please refer to my post on Great Lakes Christmas Ale, and stay tuned for my tirade about Bell's HopSlam when that madness begins in mid-January).  Today it finally arrived on our shelves.

Highland Brewing Co. is a brewery based in Asheville, NC, who turn out spectacular beers, and have made the transition from a local to regional player in the beer market.  Their distribution has steadily grown over the last few years, and they are getting to be a considerable force in the craft brew scene  in Appalachia and the greater Southeast. 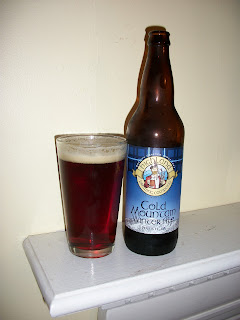 Their winter seasonal is named Cold Mountain and bills itself as "lightly hopped" with "hints of spices" and "natural flavors added," which include extracts of raspberry, cranberry, and hazelnut with vanilla beans and cinnamon sticks to round things out.  The ABV is not listed on the bottle, so probably clocks in at less than 6%, as per NC beer labelling laws.  $5.49 for a 22oz. bomber.

It pours a lovely cherry-amber color, and creates a decent head that diminishes quickly, leaving light lacing.  The first thing to be noticed on the palate is hop bitterness, and the fruit character is very subtle, subdued.  A little cranberry sourness pops in to accent the hops, and the raspberry fruit lurks furtively in the background, hoping to be noticed.

This beer has great complexity, as different notes reveal themselves the more you listen to it.  It is medium bodied, and a tad of the vanilla shows up in a stemmy, woodsy seam.  As it warms in the glass, more and more of the nutty notes arrive for discovery.  Hazelnut and toasty pecan begin to reveal themselves.  Whatever cinnamon present here is so well integrated, it doesn't come across obnoxiously, but blends in well with the nuttiness and vanilla. The bitter hop note that initially pops up on the attack returns on the finish, but subsumes into the nutty aftertaste that lingers and lingers.

Assessment:  Definitely a winter beer, without being obnoxiously overdone with baking spices, or fruit adjuncts.  Yummy, but I wouldn't be blowing up my retailers phone over it.  My Mother-In-Law is in town, and we gave her a taste.  Her opinion?  "A man's beer, probably good with hamburgers."  LOL.  But I do agree with her on one thing: it's a masculine brew, and has a lot of different, complex levels.    Pick one up while you still can.
Posted by Unknown at 9:04 AM