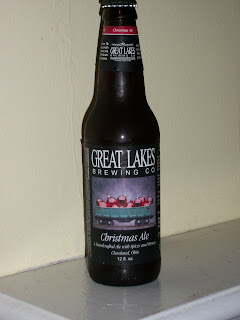 One of the holiday season’s most popular seasonal beers is the Great Lakes Christmas Ale.This beer is highly allocated and very, very popular.Our store received a one-time shipment of 40 cases and it’s unlikely we will get more. This means that by the time you read this post, I probably won’t have any left to sell you. In keeping with the mocking, existential humor of highly allocated seasonal beers, this beer will all be gone long before Thanksgiving, much less December 1, and by the time you are thinking about “Christmas Ale” or Xmas in general, there will be none to be found. Anywhere. I’ll be fielding phone calls all through December telling sad souls that no, I’m sorry, the Great Lakes Christmas Ale is all gone, and has been sold out for a while now.Better luck next year. It will have all been bought up and squirreled away by those for whom this is not their first rodeo with highly allocated seasonal beers. Yep, these are the guys who bought up all the Southern Tier Pumking in mid-September, and will be there to get Bell’s HopSlam the day it goes on the shelves.

When a product can generate this kind of fervor in customers, I’m always interested to see what all the fuss is about. Last year when Bell’s HopSlam hit the shelves, I split a six pack with two friends just so I could see why everyone was so nuts over it. Considering the rapidity with which Southern Tier’s Pumking flew out of the store, I should have picked up a bottle of that this year too, but it looks like I missed my shot on that one. So when my store got our 40 case allocation (limit one six pack per customer), I had to give it a try. I bought a single.Retail $2.19 for a 12oz bottle.

But I told you all that to tell you this: It’s pretty damn good.

This beer bills itself as a “spirited ale…as festive as the season” and brewed with “cinnamon, ginger and honey.” Now, normally this would put me off. First off, I’m a Scroogey Grinch of the first order, and all things Xmas irritate me (especially in the first week of November! Blaaarrgh!), and secondly, I’m not a big fan of spiced beers. While I’m not morally opposed to adjuncts in my beer, I often find that baking spices are so overused they become the dominant note (Winter Warmers and Pumpkin beers, I’m talking to you here) and if I wanted a cinnamon flavored beverage, I’d be drinking mulled cider or a Hot Toddy.

But I’m pleased to report that this beer was a nice surprise. With a pleasant but not powerful ABV of 7.5%, it pours a clean amber/caramel into the glass. The ample head of this lightly carbonated brew diminishes quickly, but leaves delicate lacing. The nose is subtle, but grows as the beer comes up in temperature.The cinnamon and ginger are slight but detectable, along with sweet malts and a faint floral note.On the palate, the spices and honey and ginger blend in nicely, not overwhelming the brew at all, but working in harmony with caramel malts. Hops are muted. It is lighter in body, and doesn’t linger overlong on the palate. All in all, a very pleasant and drinkable winter beer; I can definitely see myself drinking this while snuggled under blankets with my wife and hound in front of the fireplace.
Posted by Unknown at 10:41 AM