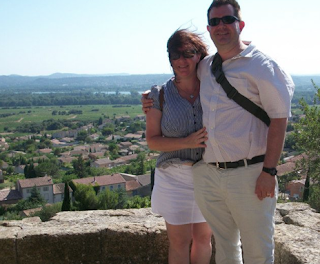 I'm a New Orleans boy who learned early on that there's a whole huge world out there outside those rings of levees.

I grew up in a household that treasured a good meal, and after earning my spending money during college working in restaurants, I opted for a Culinary Arts degree instead of going to grad school.  I've spent my professional life working around food and wine.  And while I've been in the kitchen or on the floor or sometimes even behind the register, my career has boiled down to two things: helping people have a good time and creating memories.

I started this blog to hone an old passion of mine, writing, to bring it back into the forefront of my life, and to give myself an outlet for this long neglected part of me.  Many, many years ago I attended an arts school called The New Orleans Center for Creative Arts and studied creative writing there the last two years of high school.  I moved on to the University of Missouri and got my BA in English with minors in Art History and Classical Civilization.  I kind of consider my degree to be in Western Intellectual History, a major that doesn't exist, but ought to.

My Culinary Arts program was modeled with the European apprenticeship model in mind, and one of the requirements was that I have a full time kitchen job during the three years of instruction.  After receiving my AS in Culinary Arts, I worked for several restaurants in New Orleans as a Sous Chef.  Some, unfortunately, no longer exist, but hell, that's the nature of the Beast.  In 1999 I had the pleasure of accepting a management position in a  little candyshop in the French Quarter.   This wasn't selling lollipops to schoolchildren; we specialized in handmade, high-end sweets and traditional New Orleans delicacies.  Over 90% of our inventory was made on the premises from scratch.  One of the remarkable things about being in the candy business was its ability to transform even the crankiest, world weary customer into a wide-eyed, delighted eight-year old.  And while the pun is certainly intended, it was truly a sweet job.

It was during the candystore years that I finally settled down a bit, and married.  Mrs. Gilbert and I found, however, that our situation in NOLA was becoming untenable, and the runaway housing market was disrupting our goal of not being renters for the rest of our life.  Our inability to purchase a home was basically the final straw in our love/hate relationship with our hometown, and in July of 2005, we did something that not a lot of people have the stones to do: like modern pioneers we moved across the country with only our savings, property, and no waiting job offers, just the promise of better opportunity.   We settled in Charlotte, NC, and not a moment too soon.  Seven weeks after we moved here, Hurricane Katrina forever altered the city we grew up in.

I accepted a position as a Pastry Chef for a restaurant that was closed by its parent company less than a year after I came aboard.  It was then that I realized that I missed the personal interaction with the customers I'd had at the candystore.  I decided to venture through the swinging doors, from the kitchen and into the front of the house.  I pursued a position waiting tables, and worked my way into fine dining.

Fine dining was great, as I enjoyed the formality of it, the fine wine and fine food and fine tablewares, and the evident pleasure of the people for whom I was creating memories.  And of course, the high check averages.  But something was missing.  I had developed a real interest in and passion for wine.  I'd always liked it, I had learned an awful lot about it, but like many things, I had learned that while I thought I knew something, I didn't really know anything.  When the chance arose to be part of the opening team for a new wine retail store here in Charlotte, I folded up my apron and rolled up my sleeves.

I was on the sales floor educating customers and myself for almost three years.   I won't tell you who I worked for, but trust me, if you spend any time reading my posts, you won't have to be Sherlock Holmes to figure it out.   In my time there I really immersed myself in my ongoing wine education.  I racked up a couple of certifications, some in-house and some from internationally recognized organizations.  I guess the one I'm proudest about (so far) was passing the SWE's Certified Specialist of Wine with a 94%.  I also recently received the Level III Award in Wines and Spirits from the Wine and Spirits Educational Trust and achieved their highest level of success, the coveted Pass With Distinction.  That may mean nothing to you, but it makes me feel like a rockstar.  Eventually it came time for me to move away from big box beverage retail and migrate back to the service side of the industry.  I now hold two jobs; I work for a small wine shop with a big wine bar, and I also returned to wait tables at the restaurant I left when I ventured into retail.

But enough of the CV.  Want to know some other stuff about me?


I used to be a huge music nerd.  Growing up in New Orleans I was aware at an early age of the unique contributions of my city to American culture.  When I was a teenager, I took advantage of the relaxed attitude of bars regarding minors to see a LOT of live music.  I did college radio at the end of the 80's and beginning of the 90's, a very influential and transitional time in American popular music.  I could reel you off a list of bands that I had the good fortune to see live that would blow your mind, from John Lee Hooker to Iggy Pop to Nirvana to Ernie K-Doe.  Rock and Roll has cost me a good part of my hearing, so if we meet in person please excuse my tendency to talk loudly.  My tastes are diverse, and you might find me listening to Wagner one day and Cole Porter the next.

I love going new places and trying new things. My extended family always lived outside NOLA, so I have been travelling for fun since I was a kid. As an adult, I have tried to maintain that momentum, and I take pride in being a globetrotter. My wife and I have a saying: "A once-in-a-lifetime trip, once a year." I truly believe that travel has made me a better person, and that exposure to the wider world has the ability to fundamentally transform people.  I've been to a pretty decent number of countries, and I am always eager to add more to the list.

As you might expect, I'm pretty open to strange foodstuffs, but it can take time for me to finally work up the courage to try the more exotic  offerings.  And with all the years of sanitation training that being a restaurant professional has given me, I am always cautious about foodhandling safety.  I regret not eating street food in Thailand, but after a bout of intestinal distress a few years earlier in Costa Rica, I was unwilling to risk it.  And though I haven't worked up the courage to eat a balut or raw durian, I can say that tripe, Rocky Mountain Oysters, alligator, frog's legs, chicken feet, pig ears, jellyfish and grasshoppers have all been on the menu before.

And wine.  Wine wine wine.  The wine budget at Chateau Gilbert got really out of control for a while, but I've managed to reel it in a bit.  The vast majority of it went into my cellar, but a lot of it ended up in our glasses.  And having a front seat for the craft beer revolution is a fantastic experience.  I used to homebrew, and one day hope to get back into it, but with everything that is going on in the beer world right now, I think the glass carboys can stay in storage a little longer.  So that's what will be the real meat and bones of this blog, food and beverage.  You'll get reviews of what I've been drinking, eating and sometimes where I'm doing it.  And when I get my chances to run away on my little adventures and go somewhere cool, you'll get a full report.  Other stuff will pop up here and there, as this is a forum for whatever I want it to be. Hell, it's my blog, ain't it?

So, come along for the ride with me.  I don't know how you got here, but I hope you'll stay.