On the third Thursday of November the new vintage of Beaujolais Nouveau is released.  And when I say the new vintage, I mean exactly that: it is new.   Brand new.  These grapes were harvested maybe eight or nine weeks ago, zoomed through the winemaking process, and brought to market in about the shortest time possible.  In France, there are festivals related to this wine's release, and some time ago the fever spread to the US.  That it comes to market a week before American Thanksgiving is either a happy accident or  a stroke of marketing genius, but nevertheless, the public greets the arrival with the most wonderful sound in the world to a retailer: the opening of wallets.    It has become an entrenched notion that this is a good pairing for your Thanksgiving table.  Personally, to me this is just a fun party wine, and I'll be enjoying wines from the Cote D'Or or the southern Rhone with my Thanksgiving feast, but that's another post.

In the interest of disclosure, I have to admit that I have never been much of a fan of Beaujolais Nouveau. I find it a bit rough, and young, and lacking complexity or depth. This year is an exception. For the first time in years I have found it tolerable, even delicious. I liked it enough that I actually bought a bottle to bring home. 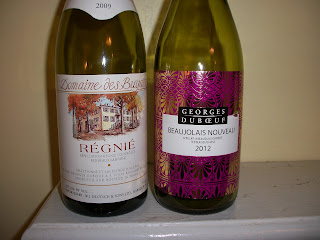 The southernmost Appellation in Burgundy is the Beaujolais region, directly to the north of the city of Lyon.  What differentiates Beaujolais from the rest of Burgundy is the type of grape grown, and the underlying geology.  In the rest of Burgundy, Pinot Noir and Chardonnay are the king and queen, overwhelmingly dominating grape production.  And in fact, this region of France is truly the "spiritual homeland" of both Pinot Noir and Chardonnay, as well as the progenitor of the concept of "single-vineyard" wines.   Some of the world's most sought after, expensive and prestigious wines hail from this region in central eastern France.  But we're not here today to talk about DRC and Corton-Charlemagne.  We are here to talk about the southern cousin, who doesn't get a lot of attention, except when the party starts in late November.

The Gamay grape is what is dominantly grown in Beaujolais.  The chalky, limestone sedimentary soils of northern Burgundy transition to igneous granitic soils in this southernmost part.  Because geology ultimately determines what vineyards one will plant (in addition to climate, of course), the decision to cultivate Gamay here rather than the other grapes of Burgundy was made long ago.  And within Beaujolais, there are a couple of subdivisions of distinction.

Beaujolais Nouveau is a young, rough wine that goes from field to fermenter to bottle to market as quickly as possible.  It is sourced from good vineyards, but not necessarily the best, and carries no specific geographical designation.  The next step up is just straight Beaujolais.  These grapes may be sourced from anywhere in the appellation, but mostly from the southern reaches of the region.  Above that sits the Beaujolais-Villages, a slightly higher tier of prestige, using grapes sourced from 39 villages which reside further north.   And at the top of the quality Beaujolais pyramid sit the 10 Cru villages, strung like pearls along a north/ south axis on the western side of the river Saone.  These villages are allowed to use their name on the bottle, to designate a very specific area of origin.  For a good map to help you understand what I just told you, check this out.

The Cru Beaujolais are a little more suitable for aging than their Nouveau cousins. While I wouldn't recommend holding on to your Nouveau for any period of time longer than 90 days, the wines of the Crus can take a few years of cellaring. Nothing extended, we're not in Bordeaux here, but a half-dozen years is not totally outrageous.   One thing that Beaujolais Nouveau does do really well is it gives us a good idea of what any given Burgundian vintage will be like.  A good Nouveau leads us to expect that the regions more serious wines will also be excellent once they come out of the barrel and cellar and onto the shelves.

With all that in mind, please click through to see how the 2012 Beaujolais Nouveau compares to its little more mature, distinguished cousin.


Last night we decided to compare the 2012 Georges DuBouef Beaujolais Nouveau against a 2009 Regnie from Domaine des Buyats (a Domaine also under the umbrella of Georges DuBoeuf).   First the Nouvea:

This bottle has lovely packaging, evoking the Art Nouveau of the Belle Epoque.  In the glass it is a vibrant, bright, medium purple with brilliant clarity.  It shows a thin, watery rim when tilted in the glass, which evidences its youth.   A friend often calls Beaujolais Nouveau a "neon" wine (which is a great term that I am going to steal from her shamelessly and without attribution), and when you hold this wine up to the light and look through it, a perfect description.  When illuminated from behind, it literally glows. 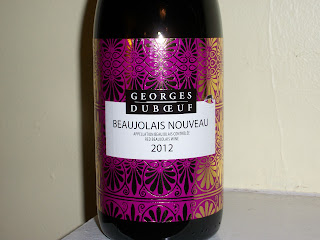 The nose is a powerful explosion of strawberry bubblegum, with hints of banana candy lurking in the background.   This is a dead giveaway for carbonic maceration.  What's that?  It's a winemaking technique that allows fermentation to occur without the traditional pressing of grapes.  It allows color extraction without the traditional maceration on the skins.  For the consumer it means you will get a wine that preserves its fruity character, will have good color, yet has low tannins.
And tannins are not really a component here.  While the wine crashes around the mouth with lots of vibrant fruit notes, it finishes with an astringency born more of acid than any sort of tannin.   The sour fruits dominate here: strawberry, raspberry, cranberry.  Imagine what a cranberry Jolly Rancher would taste like, dial down the sugar and that is what this wine reminds me of.
Assessment:  Fresh, fruity, great nose, high acidity.  Light-bodied.  Vibrant and "neon."  Simple, but pleasant.

Georges DuBoeuf raised a big ruckus back in 2009, proclaiming it "The Vintage Of A Lifetime!"  And truly, '09 was a Cinderella year for France.  Pretty much every AOC in the country made fantastic wines, and if you pay any attention to the price:vintage nexus in the France aisle of your local wine retailer you'll see the evidence. 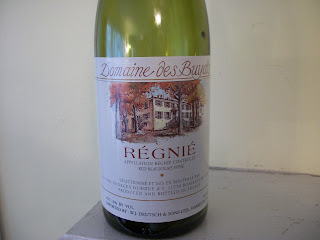 This wine pours a much darker hue, with a slight rim of the red brick, orangey tint that evidences age in a red wine.   Deeper purple in color, it also has greater opacity when held up to the light.  The nose is also more subdued, both in tone and prominence, but carries notes of cooked dark fruit.   But they take a moment to arise; the wine needs a good swirling before they release from the glass.  The bubblegum and candy scents that might usually be present are so faint as to be near undetectable.
On the palate, the cooked, plummy notes reveal themselves.  Acid is present, but at far lower levels.   This wine approaches being medium-bodied, with a rounder mouthfeel.  A hint of the iodine finish that I often associate with the granitic soils of the Cru Beaujolais is present here, but not as overpowering as it has been in other Cru wines I've had.  If I were having this in a blind tasting I would probably initially identify it as a Pinot Noir, only after contemplation do the Beaujolais characteristics come forward.
Assessment: Subdued yet rich fruit, moderate acidity, deeper color.  Light to medium body.  Subtle, with some complexity.  Still enjoyable three years after its birth, and suitable for holding for a couple more years.

We almost have two different animals here.  A great exercise to show how two different wines, even though they hail from the same greater region, can display very different characteristics.   If there is a common thread that might unite these two, I would say that it is the fruit character and relatively high levels of acidity that both wines have.  They are like two sisters, one young and immature and very outgoing, but without much depth to her personality; the other sister is older, more refined, more sure of herself and her way in the world, but quieter.
If you are looking to have fun, take part in the festivities and just enjoy a bottle go Nouveau.  Want something a step up, and with greater subtlety?  Get a bottle of the Cru.
﻿
﻿
Posted by Unknown at 9:26 AM