Ever since Mrs. Gilbert and I travelled through the Burgundy region of France, we've made no secret of our love for its wines.   The persistent problem we encounter is that our pockets aren't quite deep enough to indulge our love the way we'd like to.  But every now and then, we splurge, and pick out  a red Burgundy, just for the hell of it.

I was unexpectedly granted a three day weekend recently, and we took an impromptu trip up the western part of North Carolina.  We rented a cabin in the mountains, and took some time to unwind, hiking in the woods, reading, hot tubbing and listening to the last of the leaves fall.  I also did a little scouting for places to go fly fishing when the weather warms back up in the spring.  This was the bottle we took along. 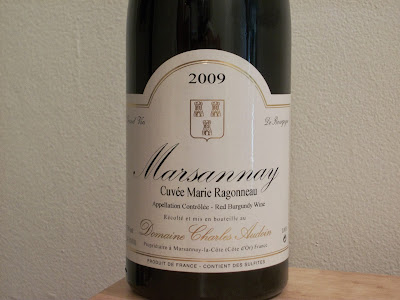 Marsannay is a village in the Cotes de Nuits, and has no Grand or Premier Cru vineyards.  In fact, this village is the most recent addition to the rolls in the Cote de Nuits, receiving  AOC status in 1987.  Due to the lack of big-ticket named vineyards here, prices stay somewhat closer to earth, and the winemaker's reputation can be the main driving force behind price and demand.  I obtained this bottle for a quite reasonable $36 USD.

It shows a medium ruby in the glass, with just a tinge of garnet at the rim.  The nose is closed upon first inspection, but with time in the glass begins to open a bit.  There are aromas of black olive, sweet potato, sweet spices and a hard-to-pin-down scent of dried fruit somewhere between red cherry and cranberry.  Despite being an '09, this wine is already beginning to show a touch of maturity.

Lighter bodied, and with a pronounced acidity, this wine is all subtlety.   It is marked by its lack of dominating character.  Nothing about this wine, save perhaps its acidity, really pops.  Rather than coming out of the glass and announcing itself with clamor, it draws you in.  The drinker attempts to tease the secrets from the wine, taste after taste, trying to pin down its character.  This is a light and acidic Pinot Noir; at first, almost too tart and dry.   But it reveals itself better, and other elements begin to surface, with more time in the glass.

If you are used to the huge, voluptuous super sexy California fruit bombs, this will give you pause.  It's Audrey Hepburn, not Gina Lollobrigida; your elegant older Aunt, not your brother's next ex-wife.  It is a wine for contemplation, not hedonism.  There are some solid tannins here, which make this a good companion for heartier fare.   I think it will mature well, as its rather close-to-the-vest character will deepen, and the integration of its components will show even better.
Posted by Unknown at 12:00 PM