My father has an inappropriate joke regarding the pronunciation of "Pouilly-Fuisse," and it dates back to the 70's, so if you've been in the wine world for a while, you've probably encountered this humorous and bawdy mispronunciation.

Pouilly-Fuisse was one of the first White Burgundies I was exposed to early in life.  Burgundy is a region in central France, south of Dijon, and produces almost exclusively two reds and two whites: Pinot Noir and Gamay for the reds, and Chardonnay and Aligote for the whites.  Gamay and Aligote most definitely play second fiddle to their more renowned siblings, so when we talk of White Burgundies or Red Burgundies, it is understood that we are talking about Chardonnay or Pinot Noir.  Pouilly-Fuisse is a village in the sub-region of Maconnais, known almost exclusively for white grapes.  Chardonnays from the Maconnais aren't as prestigious as their more northerly cousins from the Cote de Beaune, but don't share their stratospheric prices, either.

I believe this contributes to the cachet and enduring appeal it enjoys among American wine drinkers.  Typically, it shows some oak treatment and a touch of malolactic fermentation, without being the heady, voluptuous butter bomb that we are accustomed to from California, making it accessible, yet different.  It also benefits from a historically recognizable name, as well as being within the price range of reasonableness, and thus its ensured popularity. 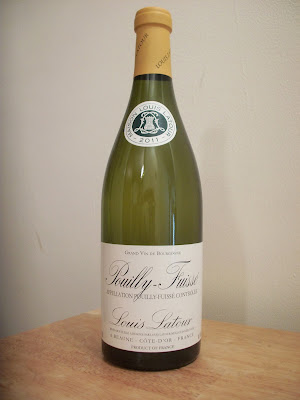 I am always drawn to Pouilly-Fuisse because I like a mild oak treatment and subtle malo on my Chardonnay.  And while my palate is in a constant state of evolution, and I'm (finally) coming around to the more aggressively oaked, fuller-bodied California expressions of the grape, I still favor subtlety over the "turn it up to eleven" approach.  Pouilly-Fuisse achieves a good balance.   I don't have to relegate it to the dinner table the way I do a lot of the aforementioned California "Chateau 2 X 4" oak grenades.  It works as a cocktail wine or with food. To be concise, it walks the line, and well.

We drank this as a dinner wine, paired it with the crab cakes described in the last post, and it performed excellently.   This is a Louis Latour wine, one of Burgundy's largest negociant houses, a winery that sources fruit and makes wine from an insane number of properties in the region.   Able to take advantage of economies of scale, this producer can release wine of fine quality and keep the price  reasonable.  I picked this up at a big box membership retail club for right at $15 plus tax, which makes it eminently affordable, especially considering the quality.

The wine shows a light golden straw hue in the glass, and displays aromas of tree fruits on the nose: sweet red apple and pear come immediately to mind.   The same notes arrive on the palate, along with a nice creaminess and a subtle acidity.  The oak treatment is restrained, suggesting older French oak  It had  a medium body and a pleasant fleshiness, both light on it's feet, and voluptuous.  It has a desirable roundness, not as lean as a  St. Veran, or clean and mean like a Chablis.

This wine is an affordable and enjoyable entrance into the world of White Burgundies.  If your preference is for California Chardonnay, you won't be put off by this, and in fact may come to appreciate the lighter hand of French winemakers.  If you like crisp and bright wines, this will show the desirable aspects of barrel aging and malolactic fermentation.  If you just want a nice wine to have with your white meat Sunday dinner, or something delicious to crack open when friends stop by, you won't be disappointed in this bottle.
Posted by Unknown at 3:32 PM