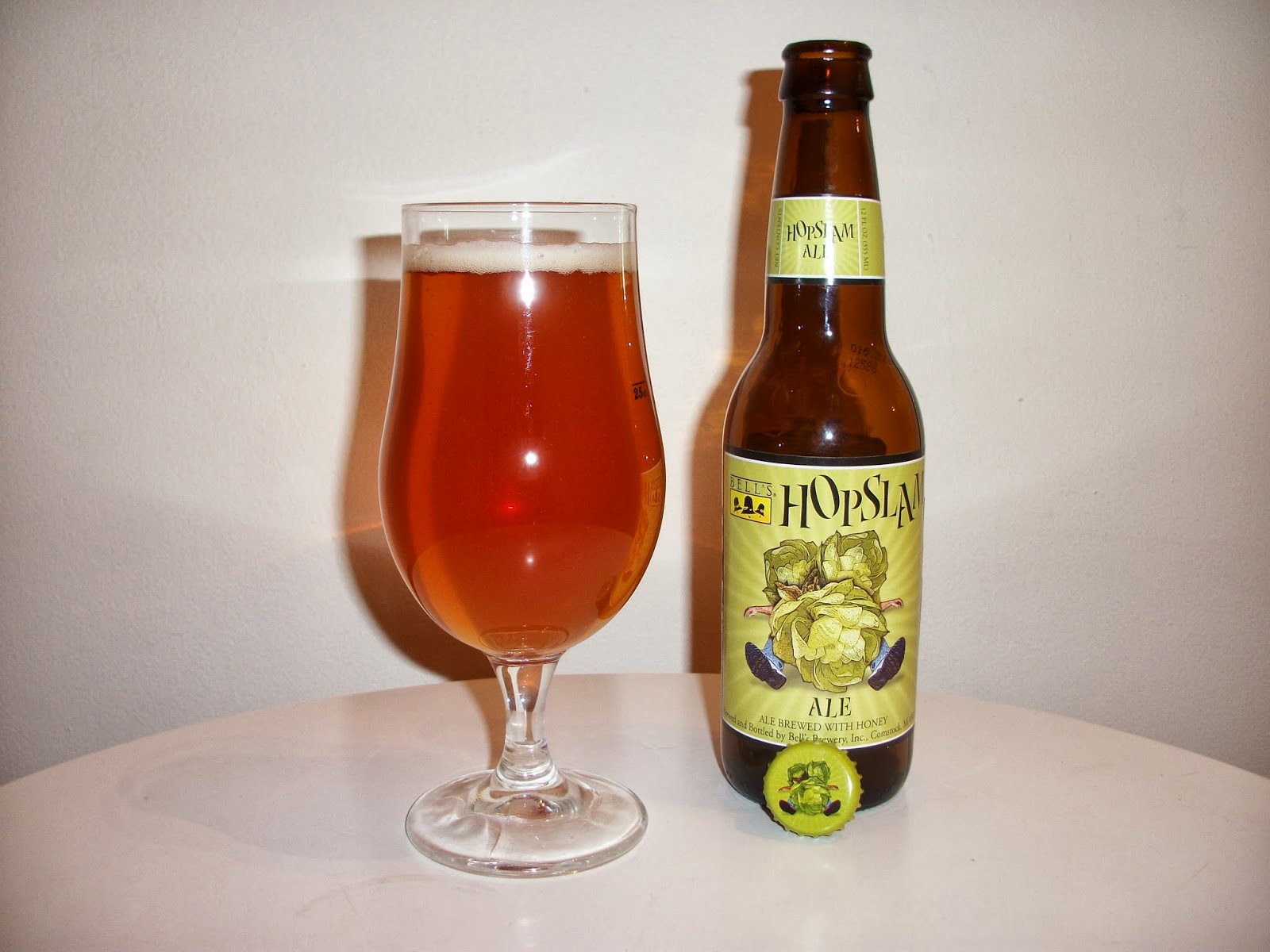 It's that time of year again, and by the time you read this, there probably won't be any HopSlam left on the shelves for you to buy,   I know that this is a source of irritation for a lot of you out there, because there are a lot of people who would like to try this beer, but aren't obsessive enough to call a their retailer 15 times a week, or to monitor all the beer geek twitter feeds in their town to see where it has gone on sale.  I don't know what to tell you, folks.  There is so little of this beer produced, it is allocated to retailers in such tightly controlled dribs and drabs, and it is bought up obsessively by its fans that it makes it really difficult to get your hands on any.  I myself was only able to purchase a single bottle.

My bottle was packaged on 1/16/14 and purchased on 2/ 5/14.  Unlike last year (and you can read that review here), I decided to spare no time in drinking and assessing it, and to see what nuances it revealed while at its freshest.

I'll admit, the beer did show much, much better when drank young.  I'd say that this is not a style suited to aging.  The freshness of the hops give this beer greater balance than it had when assessed last year.  But one thing I will say as a testament to the craft of the brewers at Bell's, is that there is remarkable consistency shown across the batches years apart.

The color is still the lovely honey-copper, it shows great clarity, and the slight head still left ample lacing.  There were aromas of pine and resin and a slight malt character on the nose.   The big bitterness on the palate hit all the expected notes of citrus pith, pine and an undertone of honeyed, malty sweetness.  The 10% ABV didn't lend the beer any overt booziness.  As a whole, the beer just seemed more balanced, more integrated, than it did when I belatedly sampled it last year.  It lacked any of the metallic notes which put me off then.  My advice: enjoy this beer in its youth.  By holding on to it for five months before drinking it last year, I did it a tremendous disservice.   The nuances were much more appreciable this time around.  And, of course, my palate is evolving, and I'm becoming a bit more used to the ever increasing amounts of hops in the IPA arms race.

Don't get me wrong: this is still an over-the-top hop bomb of a beer.  If you aren't an IPA aficionado, you can leave this one for the greedy maniacs who follow the delivery truck around, buying it up at every store they distribute to (and don't lie, fellas, I know you do it.  I've SEEN you do it.  STOP.  Please).  I think it's definitely worth trying, just so you can see what all the hoopla is about.  But I'll admit I have a slightly different feeling towards it than I did last year.
Posted by Unknown at 10:52 AM