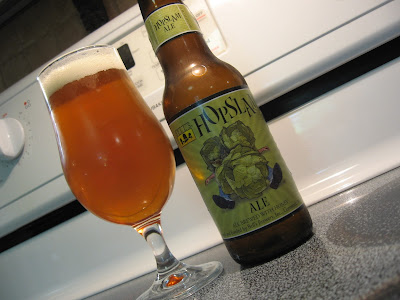 That's right, I'm finally getting around to my review of Bell's 2013 release of Hopslam.  Why so late?  In all honesty, I really don't have a good reason.   I went in on a six pack of this beer with a colleague back in February when my store got our allocation, and I've had it rattling around in my fridge door for the better part of five months now.   I don't know why I waited so long to get into it.   I wanted to save it to do a blog post about it, and I knew that the internet was awash with reviews when it hit the shelves.  Here in Charlotte its release date was considerably later than it was in much of the rest of the country.   That's because the local distributor waited until they had their entire allocation in hand before they doled it out to their retailers.

I've talked before about what a frightfully difficult phenomenon highly allocated beers are, and this is one of the most notorious of the bunch.  Much like allocated wines, they are doled out by distributors to their accounts based on several complicated factors, and like allocated wines, frequently occupy the upper tier of the price spectrum.  And because supply is so limited, customers can become a bit, well, testy, if you are unable to sell them an unlimited quantity.  Someone will want to buy a case or two, and when you tell them that it's one six pack per person per visit, they'll put their beer in the car, come back in and buy some more, go back to the car, put on a hat and buy some more, go back to the car, put on a fake beard, buy some more, etc., etc.   And if its release date is later in your market than it is in others, it can be a bit tiresome fielding all the phone calls asking you, again and again and again, if you have it in stock yet and why the hell not.

This is a beer for serious hop-heads (my grandfather would have a chuckle at my using that word in a context other than the one he frequently used it in, most notably in reference to the Kennedy family).  As the name implies, and as the label suggests with its picture of a man crushed beneath an enormous trio of hop cones, hops are the dominant force here.  But the folks at Bell's want you to know that there is more than just a tour de force of hops at work; they include the phrase "ale brewed with honey" on the label, a point of differentiation from the legion of other IPAs out there.   So, if you like IPAs and other aggressively hopped beers, this is a holy relic for you, the prize of your pilgrimage, a rare treat.  If, like Mrs. Gilbert, hoppy beers don't really do it for you, this isn't worth the price of admission.

Hopslam pours a very pretty copper-orange tinged amber into the glass, with a minimal head that subsides quickly but leaves lacing.  On the nose, this is all about the hop notes: grapefruit citrus, pine resin, herbal grassiness.  Lurking in the background is a scent of honey and malt, which gives this a slight floral tone.

On the palate, I detect exactly what is advertised: huge, huge hops.  Grapefruit pith, sour lemon, pine, and a faintly metallic quality show.  As it warms in the glass, a bit of the honey and malts begin to evince themselves.   There is a hint of something earthy, like wet leaves or freshly turned furrows in my garden  after the rain.  The beer has a heavier mouthfeel than you might expect, coating the lips and tongue with a stickiness that says more about the amount of malts and honey in the beer than the flavor does.  The beer has an extremely persistent finish that stretches out and settles in, which borders on the unpleasant, especially for those who aren't really enamored of this style of beer.  And for a beer with a 10% ABV, there is not an overt booziness, so watch out; you could easily find yourself overindulging.

I've always been told, "If you can't say something nice, don't say anything at all," and it's a piece of advice I've tried to stick to, especially here.  But I have to break that rule this time.  I was a little less than impressed with Hopslam; I'm not  a huge IPA fan to begin with, and I found this beer lacking in subtlety.  For me, it was very unidimensional, and I know that this beer is not striving for balance, but balance is what I enjoy.   I understand that this beer probably would have displayed better in its youth.  The bottles I had were stamped 1/28/13, and by hoarding it for five months before consuming I have probably done it a disservice.  But this beer is almost too hoppy for me.   As Mrs. Gilbert said, "I'm not really enjoying this.  I think if you toned down the hops, it probably has some nice floral and citrus complexities in there."   And I agree with her.  In its quest to have such an over-the-top hoppiness, Hopslam loses sight of any other virtue.

I can enjoy the occasional IPA from time to time, but I'm not entirely convinced that this beer lives up to its reputation, hype, or more importantly, price point.  $20 for a six pack?  Ouch.  I don't honestly believe that this beer would fetch those prices if it were easily available year-round.   I am of the opinion that this beer's scarity is what (partly) drives its popularity.   In playing hard to get, it can command higher prices, and probably enjoys more popularity and critical acclaim than it deserves.  Then again, it may be that its a beer that just isn't my style.

And that's my final assessment:  If you are an IPA fan, this beer is a must-try.  Seek it out, spend the dough, and enjoy it.  You very well may fall in love with it.  You may need to buy a ZZ Top fake beard so you can buy an additional six pack or three.   If IPAs aren't really your thing, I'd suggest you still try it, just so you can form your own opinion about it.   But you may want to find a couple of friends to go in on a six pack with you.