One of the interesting developments in the wine industry is the profusion and increasing popularity of proprietary red blends.  All varietally labeled wines have legal guidelines, essentially "truth in labeling" laws that govern minimum amounts of the named grape that composes the wine.  For instance, if you pick up an American Pinot Noir, Federal law stipulates that at least 75% of the wine in that bottle be made from Pinot Noir grapes.  This allows the producer 25% latitude to blend; perhaps he mixes in a little Grenache or Zinfandel to give a little more color or to fatten it up.  Maybe a winemaker blends 5% Gewurtztraminer into his Chardonnay to give it just a touch more body and residual sugar, or uses a touch of Merlot to soften the tannins of his Cabernet Sauvignon.  The laws vary from place to place: while the Federal requirements allow 25% latitude, some places are more strict about things.  Oregon, for instance, requires a minimum of 90%.  The global standard seems to be balancing at 85%, which is where Argentina, Australia and the EU have decided to draw the line.  And most American wines, especially ones that have an eye towards the export market, adhere to this 85% standard.

But what if you want to blend several different grapes to make your wine, and not meet that minimum percentage?  This is a centuries old tradition in some of the world's greatest wine regions.  If you are familiar with the wines of Bordeaux or the Southern Rhone (amongst others) you know that these places are a blender's paradise.  The differing conditions of each vintage's weather (or market conditions for that matter) result in winemakers who may adjust their blend form year to year.  Usually, these wines are named by their region of geographic origin, their AOC, but you have to know a little bit about the AOC in question to decipher what they are composed of.   Sure, I'm a cork dork, and I know the authorized varietals for a lot of these Old World regions, but a lot of people just looking to pick out a bottle at the grocery store do not.  While that may give me a bit of job security, it doesn't help a winemaker move units.  Producers have begun to incorporate percentage lists into their labeling, naming the grapes that go into the mix,so that people with less wine knowledge can feel a little more comfortable and informed about what they are buying.

This type of blending isn't confined to just the Old World either.   A lot of New World wineries are producing wines that mimic the recipes of these famous European AOC's.  In these cases you will recognize wines labeled with names borne out of tradition.  You will see the words Claret or Meritage on wines from the USA that are produced in the fashion of the wines of Bordeaux.  There are a lot of GSM's out there, echoing the blended wines of the Southern Rhone.  But if you look at the fine print, scan the label for the grains of truth that lurk under all the design and packaging,  there are two words that say it all: RED WINE.  All this means is that there is not enough of any one grape to make the minimum percentage requirements for varietal labeling.  It is in no way is a judgment of quality, simply the legal term under which these wines are classified.

In the fight for market share, wine producers have been locked in an arms race to develop wines that will capture the public's attention with clever packaging, and have a flavor profile that has wide appeal.  Rather than worry about capturing a customer that seeks a varietally labeled wine, the objective of these brands is to solicit a customer based on drinkability and good shelf appeal.   These wines are completely unfettered by laws regarding grape composition, barrel regimens or geographic restrictions, as wide areas of fruit sourcing are a typical feature of this breed.   The only requirement is that they taste good.  This frees up a winemaker to do pretty much whatever she wants, to blend in whatever she likes, and to age it however she sees fit.  As long as it results in a wine that will taste good and sell well, there are no rules.  Basically, it is a unique concoction that falls under the umbrella of Proprietary Red Wine.  Now, that's not a legal term, but an industry designation that lets us know that we have a custom blend, unique to its producer.  These wines represent a win-win symbiosis for the producer and consumer: producers have an outlet for their creativity, and consumers have something that pleases the palate and the wallet.  Sometimes, these wines present  the winemaker with an avenue to use juice that might not have made the cut for their varietal wines.  I think of them as the pound puppies of the wine world; while they aren't purebreds, lots of them make for really good dogs.

This has become a HUGE category in the North American wine market, and the popularity of these types of wines has raised some eyebrows abroad as well.  You are beginning to see more and more of these types of wines on the shelves that hail from the globe's southern hemisphere, and while some  European countries are a bit wary of this trend (I'm looking at you France), others, notably Italy, have embraced the concept and run with it.   Proprietary Red Wines are found all over the price spectrum.  The vast majority populate the under $15 bin, and do extremely well there.  Some are considerably more, and others can be found locked behind glass where they keep the show-stoppingly pricey stuff. 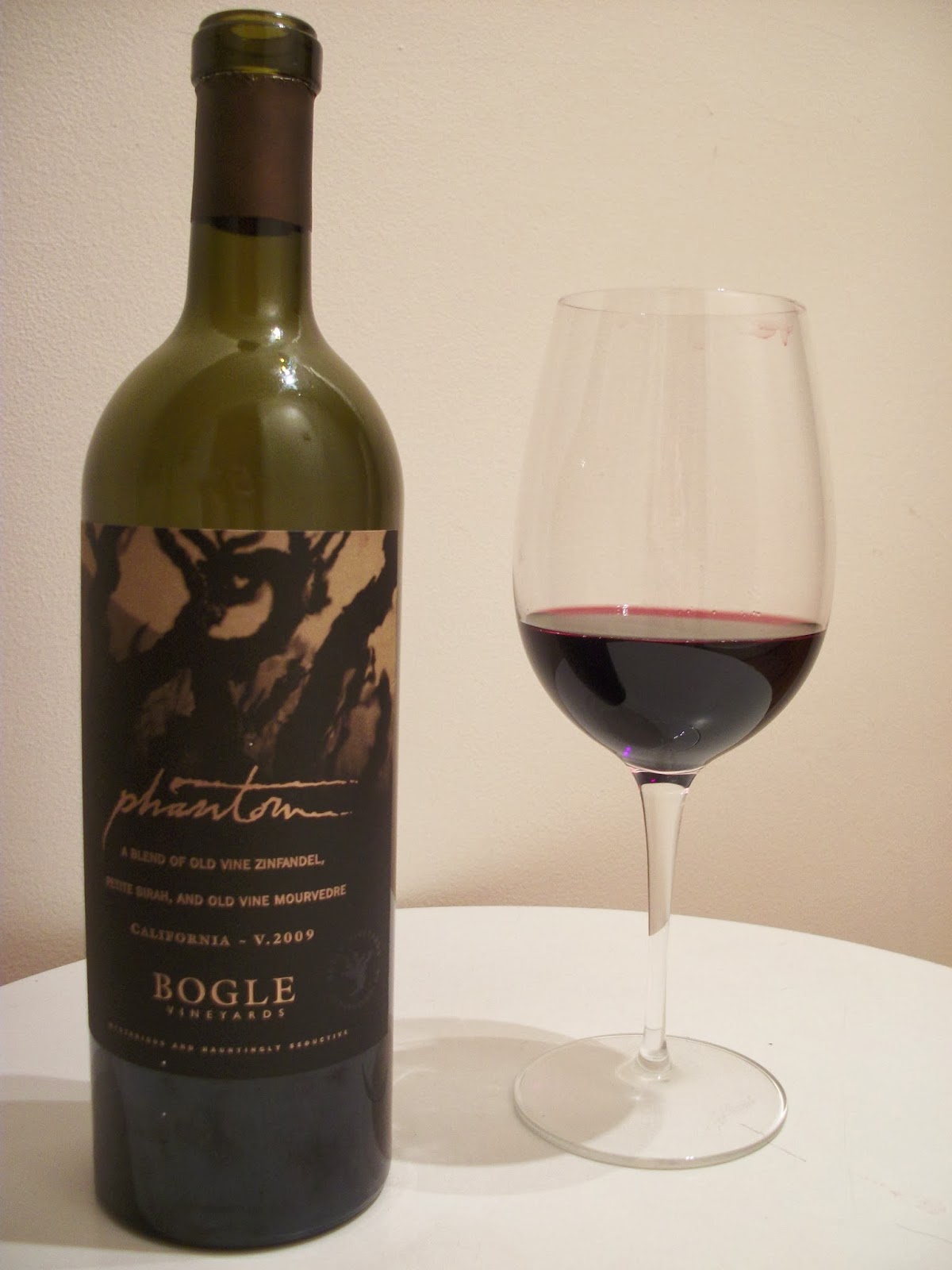 Today's selection is an offering from California producer Bogle.  This averages about USD$18 in my neck of the woods.   The wine is comprised chiefly of Zinfandel and Petite Sirah, with just a touch of Mourvedre thrown in.  There are no exact percentages given, but a little digging on the internet reveals that the composition does shift a bit from vintage to vintage. The only regional reference on the bottle is California, which indicates that the fruit used in this bottle could have been sourced from anywhere in the state.

It shows powerful color extraction, a dark purple in the glass that fades only slightly to a dark ruby at the rim.   There is a reasonable power to the nose, with aromas of dark chocolate, tar, a hint of leather and plenty of black fruits.  There is a distinct scent of vanilla, which indicates some time in oak barrels (followup reading on the producer's website indicates I was right, the wine spends time in a mix of one, two and three year old American oak barrels).

On first examination, the wine has a brightness to it, a zip of acidity, that helps it defy its weight, but this fades with a bit of time in the glass, and the body and density become a little more dominant.  Dry, and with bountiful fruit, notes of blackberry and plum are right at the forefront, but savory tones dominate at the finish.  It doesn't have a huge peppery component the way a lot of Zinfandel dominant blends do, nor is it jammy, but it embraces some of the best qualities of Zinfandel and Petite Sirah, without falling prey to some of their more typical shortcomings.   The solid structure of medium+ tannins is, I imagine, provided by the Mourvedre, a grape that can punch above its weight when it comes to adding structure in a blend.  At 14.5% ABV you would think that this would show considerable alcoholic heat, but I didn't think it an issue, though it's possible that I'm just becoming inured to high ABV wines.  The finish hangs on without lingering, isn't overly fruit driven, and the oak regimen gives this wine a lovely polish and  integration.

There is definitely a savory character to this wine that I find very enticing.  While not exactly animal in the way I think of when I taste certain wines that have that leathery, gamey note to them, there is something dark and musky at work here.  Nicely complex, this wine would pair beautifully with hearty winter foods.  Its savory character would make this a natural pair for smoked meats, hearty stews or Steak au Poivre.  For those who like the stouter offerings of the wine world, this would even do well as a cocktail bottle, or as something to be enjoyed after dinner, while relaxing in front of the fire.  It definitely shows the possibilities of this breed of wine, which is to say no breed in particular, and demonstrates that not all proprietary red blends are created equal.
Posted by Unknown at 11:00 AM