I had accrued a little PTO from my job, and I'd been wanting to visit my parents.  They relocated to the town of Allen, TX, a suburban outpost in the greater Dallas metastasis, in the aftermath of Katrina, and I had never been to visit them there and see their new house.   Madame Gilbert had a little time off due to her Spring Break, and we had some frequent flier miles to burn, so we decided to make a quick run down to the windy, flat and brown land of Texas.

Now, my Aunt and Uncle have lived in Plano, another Dallas suburb, for nigh 20 years, so I've spent a fair amount of time in the area, and done all the big tourist things: Dealy Plaza, The Grassy Knoll, the 6th Floor Book Depository, etc.  And honestly, considering the brevity of this trip, I was really in no mood to traipse around seeing tourist sites.  I was there to see family, chill and do a little studying for my WSET class.

In our family, food and drink are central to any gathering of the tribe.  Now, many of you here have heard me complain before about the lack of my native vittles up here in the Carolina Piedmont.   Fact is, good Cajun sausage, crawfish and Gulf oysters are hard to find up here, and they don't come cheaply when you can get them.  That's not the case in Dallas.  There are enough Louisianians relocated across the state line, and in close enough proximity to the bounty of the Gulf, that Louisiana food is easy enough to obtain.   Furthermore, my parents had some nice things in their wine rack that were in need of liberation. 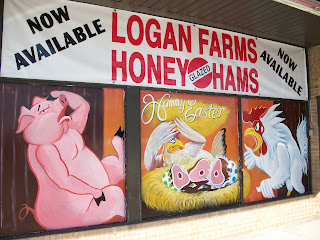 Our first stop was to an old-school meat market in Plano.  Hirsch's has been serving up hand cut beef and house-made sausage for several decades, and is a real Plano institution.  You just don't see butcher shops like this anymore.  They offer a selection of dry-aged beef, which they were unfortunately sold out of.  We had to settle for some inch-thick prime ribeyes (yeah, I know, boo hoo, right?).  I loved their colorful window display, and the ambiance in general. 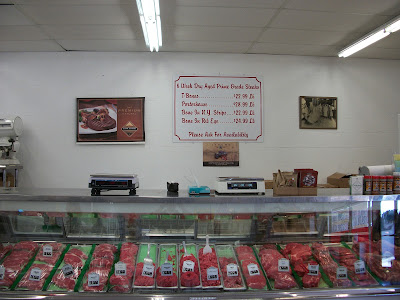 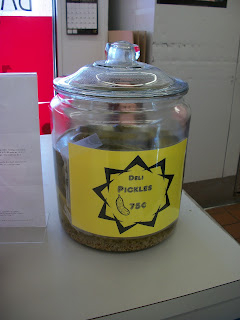 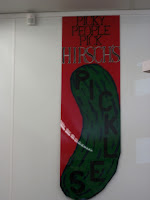 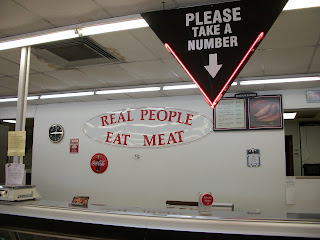 The prices aren't cheap, but as they say, you get what you pay for.  We took home our steaks and served them with some oven roasted beets a potato galette and a 2007 Grgich Hills Merlot. 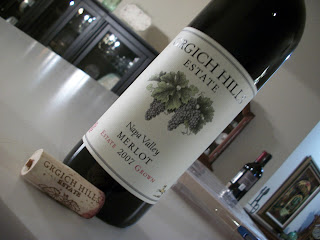 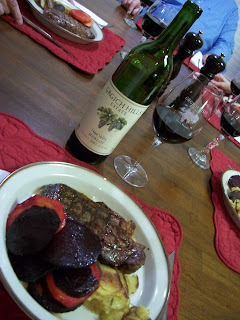 It didn't suck.  While I wasn't in the mood to take all the necessary notes for a full review of the Grgich Hills Merlot, it was a lovely wine.  As we all know, '07 was a benchmark year for Napa, and this bottle lived up to every bit of the hype.  Rich, full bodied, balancing power and velvet, it was everything a Merlot should be, and nothing it shouldn't.

﻿
The next night we went over to my Aunt and Uncle's in Plano for a crawfish boil.   A good crawfish boil is one of the things that I miss the most about New Orleans.  They are difficult and expensive to obtain anywhere outside of Louisisana, and the further away you get the higher the price climbs.  Part of the reason for this is, unlike shrimp they don't really freeze well, and unlike blue crabs they aren't farmed anywhere but Louisiana.   It also can be accounted for by the fact that most people who haven't grown up eating them don't really know what to do with them; they don't know how to eat them and they don't know how to cook them.  Needless to say, when I get the chance to "berl" some mudbugs, I jump at it. 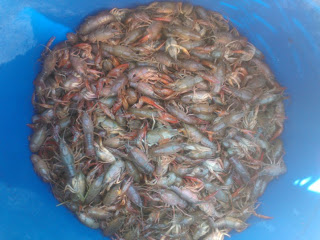 The whole process begins by plunging your mudbugs into a tub of salted water.  This forces the crawfish to puke and excrete, cleaning their innards of the muck that is their habitat, and resulting in a crawfish of cleaner flavor.   Here you can see the crawfish prior to their salty immersion.  They have a distinctly different coloration while alive than they will when they come out of the pot. 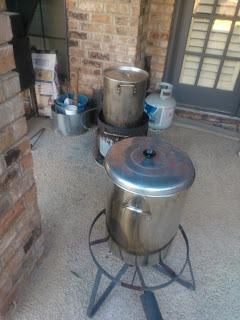 The propane burner and boil kettle are another Louisiana contribution to American cuisine.  These have in the last 20 years or so become much more standardized and available, mostly thanks to the popularization of fried turkeys at Thanksgiving.  Into the pot one puts water, salt, a good quantity of halved lemons, some celery, onions and garlic.  I like Zatarain's boil seasoning, but there are a raft of companies that make seasoning mixtures for boiling seafood.  One thing you DON'T use is Old Bay.  That's for crabs, and only if you're from Maryland or parts north.  You can adjust the level of heat by adding additional cayenne pepper if you like.   Get the water to a rolling boil, take the crawfish out of the purge, and in a moment that always reminds me of something from Dante's Inferno, plunge the perforated basket of 'bugs into the boiling water.  Let the flame keep ripping, and wait until the kettle reaches a boil again.  When it returns to a boil, count down for three minutes, and shut off the flame.  Let the crawfish steep in the hot, spicy water for another half hour.   This is known as "the soak."  It allows the crawfish to pick up flavor, but not overcook.  I've seen some people use garden hoses to spray the kettle and bring the temperature down.
When they're ready, after this half hour soak, you'll end up with something that looks a bit like this: 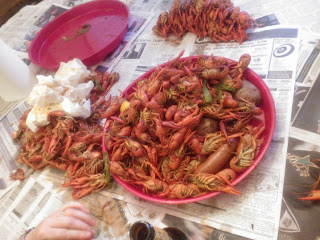 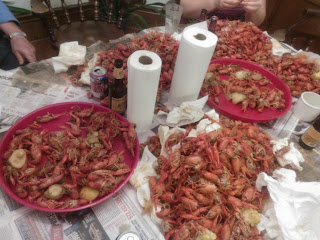 As you can see from the photo, it ain't just all crawfish in there.  We throw new potatoes in with the boil, sausages, I've even seen people put in artichokes and mushrooms. You can use the same boil water to make multiple batches.    While the first batch came out a bit salty, the second and third batches were dialed in just right.
A liberal spread of newspaper is the traditional tablecloth for boils, and an abundance of beer is the traditional beverage accompaniment.  And heaven help you if you forget to stock up on paper towels; this isn't eating for the dainty.    When you're all done, just roll up the heads and shells in the newspaper and dispose.
I ate and ate and ate, and when I could no longer eat anymore, I had a digestif: 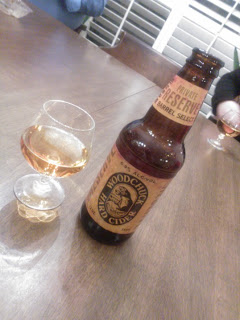 I did a review a while back of Woodchuck's seasonal Bourbon barrel aged cider, and remarked on how much the nose reminded me of  a Calvados.  I can now report that the two make for an excellent pairing.  They smell remarkably alike, and compliment each other wonderfully.
That's it for the first two nights.  Stay tuned for chapter II, wherein we discuss Oysters and Sancerre.
Posted by Unknown at 10:47 PM