The Loire Valley is a ribbon of river that runs along an east-west axis in the center of France and  empties into the Atlantic ocean.  What's interesting about this wine region is the great variety of styles of wines that it produces.  Dry reds, dry whites, sweet whites, botrytis-affected dessert whites, sparkling, you name it.   One of the reasons for this diversity of styles is the climactic differences that occur as the river winds its way to the sea.  Further inland, a more continental climate holds sway, with cooler winters, hotter summers and lower precipitation.  Were it not for the moderating influence of the waterways, this might not be wine country at all.   After all, to the north and south, away from the river valley, we are in Cidre country; this is one of the northern borders for wine production in France.  As the river moves closer to the coast, there is a pronounced estuarine influence, with the attendant fogs which enable the much desired botrytis cinera.  And at the end of the line, where the river meets the sea, we see a maritime climate, with all the typical rainfall, milder winters and cooler summer temperatures.

In typical French fashion, today's selection is named after its place of origin, rather than the grape it  is made with.   Sancerre is an AOC on the eastern end of the Loire Valley that produces some of the world's most famous Sauvignon Blanc.  (Well, at least it was until the Kiwis showed up and started making such a ruckus in Marlborough).   It sits upon soils that are akin to it's neighbor to the east, Chablis: limestone with a sprinkling of marine fossil, and occasional formations of flint.  If you like bright, mineral driven, crisp white wines and haven't tried a Sancerre, well, my friend, you're missing out.

The Christian Salmon Sancerre retails for about 20 bucks in my market and displays all the classic markings of a Sancerre: a pale lemon color with watery rim and a nose of lemon zest and freshly cut hay.  Dry, and with a faint hint of grassy herbaceousness, citrus notes abound here.  It is medium bodied, but with a zippy acidity and some chalkiness at the lengthy finish.  Elegant, balanced and refreshing, this could be your summer-in-a-bottle wine.  And, naturally, a great pair with oysters. 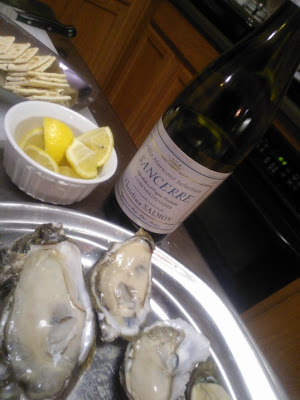 Spring Break in Texas, Part II
﻿
Let me tell you a little story about myself and my history with oysters.  Just so you'll know where I'm coming from.  First off, I'm an oyster fanatic.  I like them in pretty much every culinary permutation there is.  And I especially like them raw.  Now, this isn't really anything all that rare for a New Orleans boy, but there's a colorful backstory to my oyster obsession, and this is a story my Daddy loves to tell, so I'll try and do it justice here.
I grew up in New Orleans East, which back in the day was a relatively new suburban excrescence carved out of the marsh along the southeastern shore of Lake Pontchartrain.  Haynes Boulevard was the main road that ran the length of NOLA East, and it was demarcated on its northern side by levee and residential property to its south, where our house was, about three blocks inland.   Haynes, essentially a state highway, had a mix of residential and commercial property, and bordering the Lake was naturally home to a lot of restaurants and seafood markets.  On the other side of the levee there were a lot of fishing camps, built up on piers, over the water.   A lot of  families had these camps, often for several generations, and they were a great weekend getaway where people would fish, boil or fry seafood, drop crab traps and otherwise recreate.  And the restaurants and bars that were strung up and down Haynes were always busy, certainly on the weekends.  They had piles of boiled crab, shrimp and crawfish shells in trash heaps outside their back doors, which our hunting dog, Gus (escape artist par excellence) loved to roll around in before finding his way back home.
Well, one night when I was a toddler, maybe two, but not quite three, my folks went out for some seafood.  The joint, of course, was packed.  While the patrons waited for a table, there was an oyster bar serving folks as they waited to be seated.  This is a fairly common feature in old-school NOLA establishments: grab a dozen on the half shell and a beverage while you wait for a table. 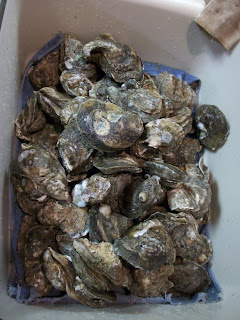 The bartender/ oysterman saw me in my father's arms, and thought it might be a fun gag to feed this little kid a raw oyster, just to see the reaction.  So he shucked me a fresh one, put it on a saltine and handed it to me.  My parents (and the crowd) watched.  I slurped it right down, with evident delight.  I asked for another.  Cue applause.  The bartender shucked me another.  And another.  And another.  Cue greater applause, and  laughs all around.
Eventually my father, standing there with his stomach growling and his tongue hanging out, started getting a bit disgruntled by the spectacle of seeing a toddler get all the free oysters he could eat, while he got none, and was only pacified by being shown to a table.
Thus began, in my mental pre-history, my love affair with oysters.  If a NOLA boy tells you he was so young he can't even remember the first time he had a raw oyster, that's a bonafide OG credential.   So when I get the chance to tear up some raw "ersters," I grab it with both hands and get busy.   Now, I've had plenty of oysters from Hog Island, Kushimotos, Bluepoints, Malpeques, Pamlico Sound, yadda yadda yadda.  And while I love them all, there ain't no erster like a Gulf erster.   Oysters from the estuarine waterways just barely inland from the Gulf of Mexico, and just off the coast of Louisiana, especially near Plaquemines Parish, have a a certain je ne sais quoi that others don't.  No excess brininess, a lovely creaminess and a plumpness that is unmatched anywhere.
So, to make a short story long, while in Dallas for Spring Break, my parent's local grocery had Louisiana Gulf oysters for the unbelievable price of $3.49 a dozen.  If you can't envision how awesome that is, imagine Scrooge McDuck swimming in a pool of seafood instead of gold coins.   If you've been paying a buck fifty each for west coast oysters that are barely the size of a silver dollar, imagine buying TEN DOZEN oysters for thirty five dollars, plus tax.  And furthermore, these were THE largest oysters I have ever seen in my life.  NO SHIT.   Here's one literally the size of my palm. 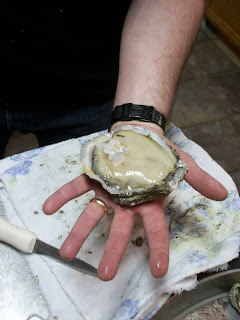 Shucking these bad boys was a real chore: they did not want to give up the treasure.  We didn't find any pearls, but hell, who cares.  The trick is to find the hinge of the oyster and to pry it open, then slide the knife in to sever the adductor muscle away from the top part of the shell.   One then slides the knife under the oyster to sever the adductor muscle away from the bottom half of the shell; this way the oyster can be slurped right from the shell, or plucked up and placed on a saltine.   But these oysters, perhaps because of their gargantuan nature, were some of the most stubborn I have ever encountered.   And while my preference is raw, I do like them cooked as well, and the ones that would not comply with our efforts to pry them open went on the grill for a few minutes, which will get even the most resistant oyster to open.  To illustrate how difficult some of these were, my Dad actually snapped an oyster knife in half, and had to trade up for a flathead screwdriver.
The traditional accompaniment is a squeezing of lemon and then a cocktail sauce made from ketchup and prepared horseradish, then served on a saltine.  Lots of folks add in a dash of Worcestershire sauce and even some Tabasco.  The beauty of it is that you can adjust the amount of horseradish to your personal tolerance for heat; some people like nasal-cavity clearing strength, and little kids like it to be 98% ketchup.   But I also like OTHER traditional oyster accompaniments,  like Mignonette.  This is made by finely mincing some shallot, and mixing it in with some champagne, sherry or even red wine vinegar and freshly ground white pepper.

For those who are a little squeamish about eating their bivalves raw, the shucked oysters can be placed on the grill.   We make a little vinaigrette based on the Mignonette mentioned above but with a pinch of sugar and salt added in; spoon it over the oysters and then crumble a little bleu cheese on top.  Place the oysters on the grill, (shell on the bottom, please) and cook until the cheese begins to melt just a little.   Another good one is to blend minced garlic, salt, black pepper, butter, chopped parsley and Parmesan cheese into a paste.   Form this over the exposed oyster in its shell and place on the fire.   You can watch the fireworks as the melting butter makes the coals flare up, and the paste solidifies due to the melting Parmesan.
Of course, Sancerre isn't the only wine you can drink while eating oysters.  We sampled several, including a Muscadet Sur Lie, another Loire Valley Wine, but one that hails from the very western end of the river, where it meets the sea and is a traditional pair for all manner of fruits de la mer.   Chablis also works well, as does Cava, any sparkling wine, or the Queen of them all, Champagne.  Of course, back home, back in the day, the only thing you'd be drinking with a plate of raw "ersters" would be a pitcher of Dixie beer.   Don't walk into Whitey's Seafood and Bar on Downman Road and ask to see the wine list. 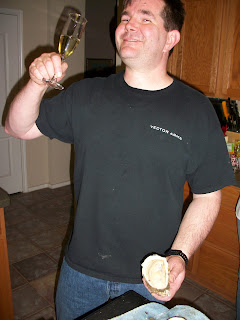