When this showed up on the shelves, I absolutely had to try it.  It's a limited release, so get out there and pick up a bottle if you like what I'm about to tell you. 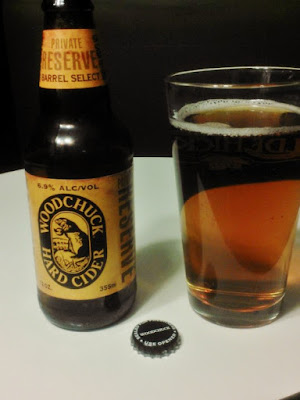 I'm a fan of ciders, lambics and fruit based beverages in general.   And, I'll admit, I like a lot of the ciders that are aimed more at an American audience, often sweeter in style.  Some people out there dismiss these beverages, and this flavor profile, as appealing to people weaned on soda pop.  There is a certain logic to this, it's a hard argument to counter.  But my taste is what it is, and I've never understood broadly dismissing an entire category of anything based simply on one's thoughts about what something ought to taste like.  And I think a lot of the mass-marketed ciders out there are decent enough, a refreshing alternative for when you're not in the mood for beer, and I think a lot of people are catching on.  They are also an increasingly popular alternative for folks who have gluten sensitivities.

Given that I am a fan of cider, when I noticed that Woodchuck had released a Kentucky Bourbon barrel aged cider, there was no question that a bottle would end up coming home with me.  (For the record, I'm also a fan of Bourbon, so you can see how the concept appealed to me).  I drank it last night and was extremely pleased with the product.

The color is that of jewelery-grade amber or a polished copper bar top.  Carbonation is minimal, quite delicate, doesn't raise a head or leave lacing on the glass.   This cider's most incredible aspect exists on the nose.  It gives off a boozy aroma that smells much, much stronger than its 6.9% ABV.   Notes of Bourbon and caramel apple combine to almost trick you into thinking you have stuck your nose into a snifter of Calvados.

On the palate, there is the characteristic gentle apple sweetness shared by all Cidres Doux, and a nice, Granny Smith-like crispness to balance.  One easily detects the distinct flavors of Bourbon, giving the cider a certain smokiness and a bitterness at the finish.  There is a distinct sour mash character here that leaves no doubt about the barrel aging regimen.

Assessment: This is fantastic.  While I'd like a little more carbonation, there is nothing here that disagrees with me.  I think this could be used as an interesting base for an enterprising mixologist to whip up some phenomenal cocktails with.   What would one call a cider Boilermaker?  Hmmnnn...