We got this on the shelf a little bit later than many people in other parts of the country did, and I have had a lot of people calling me up, asking when it would finally be available in our market.  I've covered the subject of high-allocation, limited supply special relase craft beer before, and I won't rehash all that here, for the umpteenth time.  (I'll finally be getting some Bell's HopSlam soon, so we'll get to touch on that whole ball of wax again in the very forseeable future).  But when this beer came in, I had to buy a single of it, just so I could give it a whirl, see what all the fuss was about.  The madness of crowds usually does a pretty good job of arousing my curiosity, what can I say?   Well, I liked it so much, I went back the very next day and dropped $9.99 on a whole six-pack. 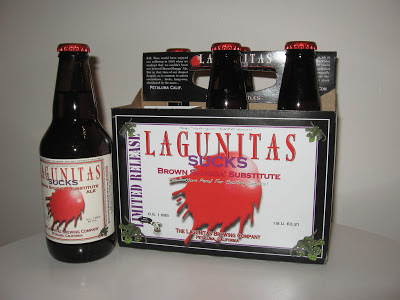 Lagunitas Brewing Co. underwent an expansion a few years back, and in the middle of the construction, they suffered a diminished production capacity.  During this time, they were unable to produce their normal winter seasonal, Brown Shugga, and so instead released this in order to pacify their customers.  That's where the name comes from, in case you were wondering.  It's sort of an admission of guilt, and a plea for mercy, all rolled up into one.

The color in the glass was that of blonde honey, maybe with just a tinge of orange-copperiness to it, and it left a creamy bone white head that deposited considerable lacing on the glass as I drank.  Total clarity.  There were big citrus and pine aromas, notes of orange peel and christmas trees.   The dominant characteristic on the palate was that of the hops: pine resin and grapefruit pith.  There was an undertone of spice, clove oil perhaps? working undercover somewhere in the mix.  But this beer was clean and light, with a cereal body that acted as a counterweight, gave it  a certain broadness, against the grapefruit bitterness tugging at the back corners of my jaw.  A lingering finish that went on and on, but pleasantly so, and with just a touch of florality.

Assessment: This beer was a real treat for me, a hop bomb that didn't over do it, an IPA that didn't feel the need to punch me in the face.  Mrs. Gilbert called it "a beer for beer snobs," and I can see where she's coming from.  But I thought it to be balanced, clean and crisp, hoppy enough to give you your IPA fix, but not obnoxiously overdone.  Unlike some beers that are "one and done," I could drink these with ease and delight.  Repeatedly.
Posted by Unknown at 8:27 AM