Well, technically, this time it was Prosecco.  We got Thanksgiving off to a proper start with a bottle of Santi Nello Prosecco di Conegliano-Valdobbiadene (yeah, it's a mouthful).  This is a sub zone of of the Veneto, the north-eastern corner at the top of the Italian boot.  Typically shortened to just "Valdobbiadene," this DOC is a top tier production region for Prosecco wines, which come in two styles: frizzante and spumante.  Frizzante have a gentle sparkle and can usually be detected by screw caps or standard cork closures.  Spumante means fully sparkling wines that have considerable pressure inside, and are secured by the wire cage and cap that we associate with Champagne bottles.
﻿﻿
This is a little party trick I've been working on perfecting for some time.  You can see a video of my unsuccessful attempt in my post from October 30.  That wasn't pretty; the bottle practically exploded in my hand.  I think there may have been a couple of reasons for this: the blade I used was impressive in size, but had a thin spine.  I was attempting it on an inexpensive bottle of Cava, which may have had a thicker gauge glass than what is wanted.  Really, I don't know why it didn't work.

This time I chose a bottle of bubbles with a slightly more slender neck, and a higher price point.  One of the sources I read while researching the technique suggested that it was easier with more expensive bottles than with cheaper ones, which makes the whole enterprise a bit risky for those who haven't tried it before.   The Santi Nello Prosecco retails for $14.99 at Total Wine, and has a slightly greater taper as the neck rises from the shoulders.   As I have stated before, I understand the  process here, I had just never pulled off the trick successfully.

So how to do it?  Here's your quick tutorial:

Remove the lovely foil and get that sucker arctic, especially the neck of the bottle.  I kept the bottle in the fridge overnight, then turned it upside down in an ice bucket.  The extremely cold temperatures have two benefits: it makes the glass somewhat more brittle, and colder Champagne effervesces less violently.

Select the proper blade.  If you have an antique saber or a cheap wall hanger sword, or maybe your uncle's old bayonet, this will add a certain theatrical flair to the proceedings.  The sharpness of the blade is rather unimportant; counterinuitively, you really don't want a sharp blade.   It will really be the percussion of the blade striking the ridge on the neck of the bottle that will do the trick, so selecting a sharp blade accomplishes nothing other than perhaps wrecking the edge on your cutlery.   The blunt edge of an 8" Chef's knife works well.  What does matter, is the thickness of the spine of the blade.  The thicker spine of a good German Chef's knife worked much better than the thin spine of a cheap Chinese machete.

Locate the seam of the bottle.  This will be a vertical line that bisects the bottle on one side from top to bottom.   This is a weak spot that remains from when the bottle was formed in the glass factory.  It may sometimes be rather prominent, and sometimes it is very slight.  Use your eyes and sense of touch to locate it.

Remove the wire cage from the neck of the bottle.  Some people recommend that you remove the wire cage entirely, others tell you to loosen it up, and to re-tighten it up onto the next bulge on the bottle's top.  Be careful at this juncture, however you do it, because a Champagne cork  is almost exactly the size of a human eye.  Because we have things ice cold, the probability of premature pop is lessened, but still, we want to exercise caution at all times.

With the business end of the bottle pointed in a safe direction, smoothly run your blade up and down the seam of the bottle, like a golfer doing a few warm up swings.  Keep the bottle pointed at a 45 degree angle, so any spillage will be minimized.  Then, with one fluid yet forceful motion, quickly slide the blade up the seam of the bottle to connect with the collar.  If all goes as planned,  the bottle will fracture smoothly around the base of the collar, a bit of Champagne will theatrically spill out, and all your friends will whoop and holler in joy.  Hopefully, your friends are standing by with glasses ready to catch any spillage that may foam out of the freshly opened bottle.

Be careful as you pour, because the neck of the bottle will be a dangerous ring of weapons-grade glass.  Taking a swig directly from the bottle is not recommended.  It is also reccomended that this be done outside, in the event of flying corks or other mishaps.  The good news is, because there is so much pressure inside the bottle, any stray shards of glass will be blown outward, so you don't have to worry about slivers of glass ending up in your bottle.

And how did it taste?   Lovely.  This pours a very pale straw color and has a light, almost imperceptible note of apple on the nose.   A bit of  green apple on the attack, and just a touch of the broader toast notes on the finish.   It's very dry for a Prosecco, hardly any of the residual sugar or appley sweetness that I normally associate with the breed, and has low acidity.  This is a perfect bottle of bubbles for cocktail hour, celebrations, or shellfish appetizers. 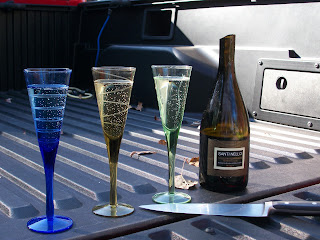