I was recently given a can of Oskar Blues Ten Fidy, their cool weather seasonal beer.  Oskar Blues is known for canning their beers, a bit of a break from the pack of craft beer producers.  One of the first craft breweries to have wide distribution of canned beers,  I asked one of their reps about this once while he was doing a tasting for us.  He explained that Dale, the man behind the brew, is an outdoors kind of guy, and that he liked to drink good beer while he was fishing, camping and backpacking.  Glass bottles are heavy, and so in keeping with the "pack it in, pack it out" ethos, Oskar Blues packs their beer in lightweight, easily crumpled (and recyclable) cans.

It's a trend I'm interested in watching develop.   Mrs. Gilbert has a general prohibition on canned beer here at Chateau Gilbert, and I think that the bulk of the craft beer world feels the same, as the vast majority of craft beers are packaged in bottles.  I have noticed a few other craft beer producers offering their wares in cans.  Most focus on summer seasonal offerings, when customers are looking for something they can take anywhere glass is prohibited: to the beach, the pool, on the boat or along on their tubing trips.  Although, I'll admit, most of my maniac friends that take me along on their float trips go for quantity, not quality (yes, I'm talking about you here 'Berto, Daniel and Richie). 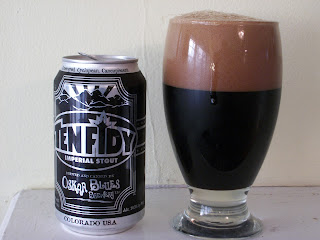 The Ten Fidy is an Imperial Stout and gets its name from its powerful ABV of 10.5%.  When poured into the glass it stacks a huge dark brown head atop an opaque, black beer.  It's almost like opening a can of foamy 10W-40 and pouring it into a pint glass, this beer is so dark.   The head is creamy and everlasting, slowly subsiding over time to leave significant lacing.

There is a scent of German Chocolate cake and a subtext of roasted nuts on the nose.  On the palate, this beer is all about the malt, baby.    A deep sweetness and robust toastiness is the essence of the overwhelmingly creamy and thick mouthfeel.  French-roast coffee, bitter chocolate, toasted nuts all swirl around in a viscous, black whirlpool.   Significant yet well integrated hops riff on the bitter elements of the above mentioned flavors, but don't overplay their hand.  It's smooth like a Barry White song, and will seduce you to the point of drowsiness.

This beer is HUGE, dark, malty and powerful.  It's good that it comes in a 12 oz can (four for $13.99!  Dude!), as that's a perfect serving for a beer this ample and hedonistic.  This is a definite one-and-done beer.  Only the most dedicated Malt Maniacs and Stout Stalwarts could kill a full four pack of these and live to rock the party.  It has a phenomenal, everlasting finish, that just hangs around forever.   And I mean FOREVER.  A good twenty minutes after I finished this, I could still feel this beer's lip-licking stickiness lingering on.  It was like an inexorcisable ghost haunting my lips, teasing my tongue out to try and chase it away like an angry priest.

Assessment?  A BIG beer in a little can.  Amazing flavor and complexity, and a definite must-try for those of you who like it black and huge.  But this beer's smoothness also makes it accessible for the rest of us.  Not only for fans of midnight intensity, I can suggest this to folks who want to dabble in the dark side.  I couldn't drink this every day, but it is an incredibly well made beer, and is a much better Imperial Stout than many I have tasted.  Definitely a best in class.   Well done, Mr Blues, well done.