This time of year there are a lot of pecan pies going around, and to celebrate the season Clown Shoes have released a new version of their pecan pie porter, redubbed Genghis Pecan.  A clever name, but what else might one expect from the goofs at Clown Shoes?  These guys are known for the catchy monikers they give their beers and also for the humorous, sometimes risque labels they package them in.   This is a bit polarizing for the craft beer world, but personally, I'm a fan of their products.  While I'm a traditionalist when it comes to my wine labels, I like a little humor and playfulness when it comes to beer packaging.  And I have found that their beers are good; I always say that it's what's inside the bottle that matters, the clever cover art just helps them to get noticed, getting their product off the shelf and into your hand. 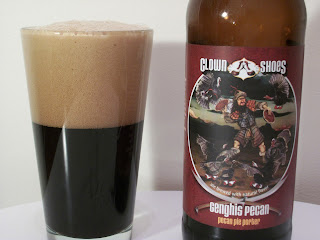 This beer is advertised as a porter fermented with roasted, ground pecans and brown sugar.  It clocks in at 7% ABV, is only available in 22 oz. bombers and retails for $6.99 at Total Wine.

It pours an opaque coffee black into the glass with a creamy beige head that leaves significant lacing as it falls.  The nose is slight, but has a note of caramel left a bit too long on the stove; in fact, a lot of the flavors in this beer tend toward the slightly burnt side.  I was reminded of  coffee that had sat in the Bun-O-Matic for far too long, before being allowed to go cold.  There is a hop bitterness present that turns on the same axis as the bitterness of just slightly over-roasted pecans.     There are vanilla, nutty tones that pensively sneak around in the background, but are ultimately faint. The body is deceptively light; at least lighter than the beer's appearance would suggest.

Assessment?  This is a solid beer, a well made porter, but I'm not sure that it really lives up to its name.  Very little here really reminds me of pecan pie,  and there is no element that evokes the notorious character of The Great Khan.  While enjoyable, and definitely a must-try for those who enjoy porters, nothing here really impresses me.  I liked it, but I have no great desire to buy it again.  I'd rather buy a bottle of one of their other beers, like Lubrication, Tramp Stamp or Brown Angel.
Posted by Unknown at 9:02 AM