This is a time of year that I greatly enjoy.  As summer begins to wind down, Fall seasonal beers start hitting the shelves.  And Fall seasonal beer is almost universally synonymous with Oktoberfest. While I'm a bit late getting to it, I decided to do a comparative review of  some Oktoberfest themed seasonal release beers that are available this time of year.

Without going into a mini dissertation on Oktoberfest, its history and traditions, it's in many ways the archetypal (positive) image that many Americans have of Germany:  Oom-pah bands, pretzels and Wursts, dirndls and lederhosen, and of course, lots and lots of beer.   The traditional style consumed at the Oktoberfest is Marzen, an amber ale that translates neatly as "March" beer.  The beer has its origins in Renaissance Bavaria and was traditionally brewed in the early Spring, and then cellared over the warmer months.  It was released in the late summer, and was naturally the beer that was on hand when King Ludwig had his initial wedding party, and every subsequent Oktoberfest.  (You gotta love a people that say "Wow, that was a great party.  We should do that again next year."  And then do.  For several hundred years.)  It has since become tied to the tradition, and is now also known as Festbier.

Marzen beers are some of my favorites, as they embody some of the qualities I seek most in beer: malt character, amber coloration, moderate hop usage and drinkability.   While some styles of beer are "one-and-done" types for me, I could easily grab a seat at the big tables under the tent and drink Mass after Mass, swaying to the Polka band all day long.

This week, we will concentrate on three beers made in this style that are produced here in America. 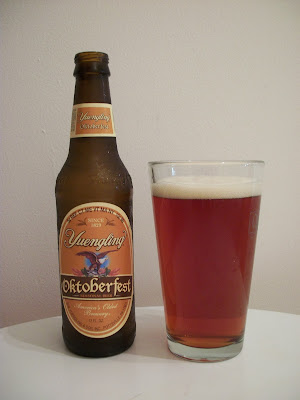 Yuengling is a beer that I had never heard of until I moved to North Carolina, and unless you live in an Atlantic state, you probably have never heard of them either.   Touting themselves as "America's Oldest Brewery," they are a major regional player on the East Coast, but lack distribution moving West.   They compete very well against the Big Three MegaBreweries, and have a reasonably priced, nicely done amber lager.  It's my go-to 12 pack when I'm just looking for inexpensive beer to stock the fridge with, or pick up on the way to a barbecue.   They make occasional forays into seasonal beer territory, and their Oktoberfest is one of their better known and more sought after.

It pours the expected orange amber and throws a decent head that lacks retention or lacing.   Everything appears to be going well, and then it just falls flat.  There is very little malt character, just a hint of maltiness, and an almost tinny hop character.  This just feels like a poor attempt at doing something different.  I wanted to like this, I really wanted it to succeed, but it just feels like a feeble attempt at a craft beer.  There is only a slight bit of differentiation from their average Lager: a shade more color, just a bit more body, but not really that different.  And certainly not different enough to justify the price difference.  Don't get me wrong, this is not a bad beer, it just doesn't wow me. 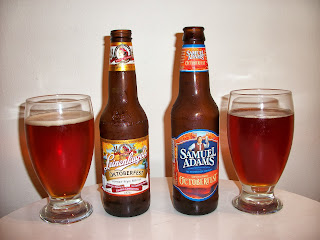 Leinenkugel is a brewery operating out of Wisconsin that I first came into contact with on a Labor Day weekend trip to Milwaukee over 20 years ago.  At the time, I was a bit perplexed by the name, but I have since learned to pronounce and properly spell it.

Their Oktoberfest, is an enjoyable example of the breed.  Considering the significant Germanic and Eastern European cultural influence on the people of Wisconsin, I'd be disappointed in them if they were to turn out a substandard beer.  The hops are subtle, and the malts a bit on the light side, but this is an immensely quaffable Marzen style offering.  I was pleased to see that it had slightly better head retention than the Samuel Adams.

Of the three reviewed today, this is the winner.  While the head subsides quicker than the Leinenkugel, the malt character of this beer is superior to any of the others reviewed today.   As you can see from the photo, it shows just a bit darker in the glass.  Hops are there, but subtle, playing rhythm to the lead.

Sam Adams, or The Boston Beer Company, depending on the level of corporate formality you are comfortable with, represent the dreams, and envies, of a lot of craft brewers out there.  While they get a ration of manure for being "too big," or  "sellouts," fact of the matter is, they were one of the first microbreweries (as we used to call them) to become a regional player and then to develop a national presence, and then to finally become a serious concern and competitor against the Big Three.  And they keep it real too, reinforcing their craft beer street cred by perpetually releasing a gaggle of small batch, seasonal and limited release "mad beer scientist" eccentricities.  Say what you want, take it or leave it, but this is a company that walks the line: they make good stuff, market it widely, and aren't afraid to take risks and diversify their product line.  Plainly put, they kick ass.

Conclusion:
Yeah, I know October is almost at a close.  The Oktoberfest in Munchen has been finished for three weeks.  I know I'm remiss in this post.  But hold on jest a minit, cowboy.  I went shopping today, and all three of these beers are still available on the shelves TODAY.  Sure, they'll rotate out soon, as your retailer burns them down (possibly at reduced prices, so strike while the iron is hot!) to make room for the winter warmers, but you can still find them.

If you like balanced , malty libations, go and get it while the getin' is good.  And feel free to pass over with a 6 pack.
Posted by Unknown at 12:05 AM