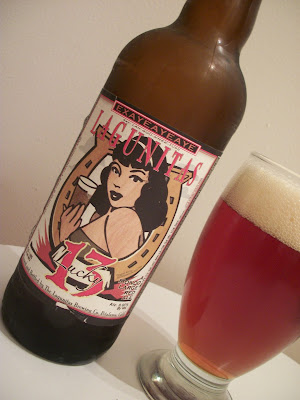 I'm a big fan of the Hot Rod/ Rockabilly artwork that has been percolating up in American culture over the last couple of decades, so this beer caught my eye when it appeared on the shelves.  I'm also a big fan of red ales and other malt-driven styles of beer, so I guess it was just a matter of time before I dropped the five bucks and took this bottle home.  Only available in 22oz bombers and on tap, this iteration of Lagunitas Lucky 13  is billed as a "Mondo Large Red Ale."  Originally it had been a Special Release to commemorate their 13th anniversary as a brewery, but as with many things in the brew world, the people spoke and now it is part of their rotating lineup of seasonal/special releases.

The color is a lovely dark amber with a hint of cherry, and tops with a creamy, three-finger khaki head.  Very active carbonation, large bubbles, and clumpy lacing.   On the nose this is very bready and yeasty; it reminded me of opening the door to a proofing box while the dough is rising before being baked.   There are vegetal notes present too, moist, damp, pine forest smells, and a bit of malt sweetness that suggests caramelizing sugar.

On the palate, its West Coast pedigree shows.  There is a significant hop bite that balances out the abundance of malts.  In fact, it is far hoppier than its nose suggests.  But the malts are the stars here.  They dominate with a caramel sweetness that makes this perfect for a malt lover.   In the finish, the hops are (barely) wrestled down by the sweet malts, giving this a pleasant, lingering aftertaste.

This beer is easy drinking enough to enjoy without having to over-intellectualize it, but substantial enough to keep from being a killer swiller.  Mrs. Gilbert says that this would make a phenomenal Fall seasonal, and I have to agree with her.  I could see drinking this in front of a roaring campfire, bundled up in an old sweater, watching the leaves fall.
Posted by Unknown at 12:37 PM