One of the really cool things about my job is that I often get the chance to meet the people who produce the things I so dearly love.  Brewers and winemakers always take an acute interest in the people responsible for promoting and selling their wares.  Of course, there is always a certain camaraderie shared by people who work within any given industry, and the hospitality and beverage biz is no different.  But I have found that the bond between people working in the restaurant and alcohol biz, due to the peculiar industry wrinkles we shoulder together, is commonly a bit tighter than it is for people of other professions, say, for instance, pest control technicians.

I was lucky enough to be working the day that one of our sales reps brought Nick Goldschmidt in to do a little tasting with us.  He was in town for a stop on one of his North American promotional blitzes.  Considering that the  man has a rather extensive portfolio of wines that he makes on multiple continents, as well as an extensive list of wineries he consults for, not to mention he has five (!) kids, I wonder how he can squeeze in time to travel and do PR.

As we were getting stemware and spittoons ready for our tasting, Mr. Goldschmidt rattled off his extensive and impressive CV.  He's worked for some of the biggest names in the wine biz, and he's been doing this for quite a while.  I can't remember exactly who all he said he had worked for and with, but, hell, that's what Google is for, so look it up if you're interested.   He has projects going on in California, Argentina, Australia and of course, New Zealand, the land of his birth.   And probably some others, too.  The man gets around.

I can't quite put my finger on the reason why, but I have to say that of all the non-American English speakers of the world, the Kiwis are my favorite.  Mr. Goldschmidt exemplified all the things I love about New Zealanders: affable,  gregarious, accomplished but not boastful, and most of all, great storytellers.  They exude an air of adventure, but fun adventure, not the "I was at death's door, mate, and would, right now, be a pile of bleached bones if I hadn't crawled into that mud puddle" adventure.   I'll take Kiwi adventure over Rhodesian adventure any day.  But I digress...

We tasted several of his wines, and all were quite excellent.   He had a Sauvignon Blanc that was not your typical Kiwi grapefruit/ gooseberry porch-sipper; his had a mineral salinity to it, and an underlying animal note.  Quite an interesting wine, perfect for cork dorks like myself, but probably a bit complex for the "Ladies Who Lunch" crowd.   We also tasted a lovely, smooth and eminently quaffable Pinot Noir, that already enjoys widespread popularity.  We declined to pick these up for sale in the shop, not because we didn't like them, but because we always have to be cognizant of what we can sell, how much space we have to sell it in, and whether or not it clicks with our niche in the market.

The next several wines in the tasting didn't just impress us, they amazed us, and a couple of those got picked up for retail.   Two of the standouts were from his Forefathers line: a 2002 Alexander Valley Cabernet and a 2004 Shiraz from McLaren Vale.  Mr. Goldschmidt was a bit incredulous that  wines of such maturity were still hanging around in the distributor's stock.   I imagine there were some words exchanged about that during the drive to the next stop.   We snapped up what was left of the '02 Cab, but unfortunately passed on the Shiraz (over my objections); we just don't sell much Shiraz, especially at the higher end of the price scale.   We also tasted the three wines that he has named after his daughters, Chelsea, Katherine and Hillary, and picked up two of those as well.   If you want a laugh, ask him about why the girl's silhouettes face the directions they do.

I liked the wines so much, that a few days later I purchased two bottles off of the shelf for my personal consumption.  Here are the tasting notes: 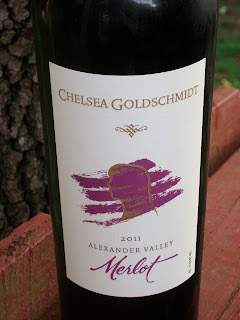 This wine poured a brilliant dark ruby into the glass.  Loads of dark fruit on the nose: cherry, plum, raspberry and just a whiff of mint.   On the palate those same fruits reappear, with just a hint of jammy, cooked character.   There is a little tobacco-y astringency,  some medium tannin to give the wine a little backbone, and a zip of acidity to keep things fresh and fleet of foot.

As the wine opens, it really mellows and softens, giving the fruit a front row seat.  While it never becomes insipid or flabby, this is the soft, plush purple couch of a Merlot that is so adored by so many.   While this would work amazingly well with a wide variety of foods (pork chops, anyone?), I wouldn't hesitate to enjoy this as a cocktail wine.  It is easily approachable enough to enjoy all on its own.  Drinks fresh now, but I would love to see what it does after a couple of years in the cellar.  Retails for $18.99, and worth every penny. 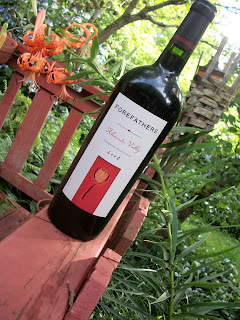 An opaque purple that fades only slightly to ruby at the rim, this wine shows no indication of its age.  It throws widely spaced tears indicative of density and viscosity.  No sediment in the bottle.

The back label touts this as a "Single Vineyard, Single Varietal" wine from a 5.5 acre parcel on the BS Ranch.  On the nose, there are strong and dark influences of tobacco, currant and black cherry woven through by notes of leather and pepper.   In the mouth, this is a dense and powerful wine.  Tannins are muscular without being bullies, and acidity is present but subtle.  The fruit character is again delineated by black fruits, and reveals itself better after the wine has had a chance to breathe, and the tannins have relaxed.   In fact, after given adequate time to open up, the wine became super smooth and richness increased.

That the wine is well crafted and balanced is evident, but it has some inherent austerity that makes this a wine for the dinner table, not the cocktail hour.  Or perhaps, for snuggling up on the couch, savoring it meditatively while your meal digests.  There is a bit of leather on the finish that reveals the wine's maturity better than any other marker present here.   We enjoyed this with a robustly sauced grilled steak, marinated and grilled Portobella mushrooms, and it stood up well to a very rich meal.

I was lucky to get this, and we have sold through all of the bottles our shop purchased.  I'll have to see if we cleaned our distributor out, or if they have a few more we can get ahold of.   Good luck finding it, but if you do happen to get ahold of some, you can enjoy it now, or hang on to it.  I suspect that this wine will drink beautifully for a few more years.   And it's a deal, too.  A mature, wonderfully crafted and ageworthy Cab, out the door for $34?   Yes, please.

Combine ingredients in a small bowl, whisking vigorously.   Adjust to taste (this is obviously an unscientific recipe.  Let your palate guide you.  We're not baking a cake here).   Pour over mushrooms, gill side up, cover and refrigerate for an hour or two.   Remove from fridge and let come up to temp for a bit, before placing on a medium-hot grill, gill side up.  When fluid collects and  bubbles begin to percolate up, flip the mushrooms and let the marinade drip off onto the grill.  Cook for about a minute or two more.  Don't let them char!  Remove from grill, cover and let the carryover heat cook them a bit more before serving.   Enjoy!