One of the effects of the global recession that began in 2008 is that wine consumers the world over are shopping for that bottle that they find both excellent and affordable.   Those of us in the wine world have seen a bit of shrinkage, a bit of stepping down at all price brackets.  Lots of our customers, whatever their previous level of expense are seeking a bottle that's "just as good" for the next step down in price.   The high rollers will always be with us; there will always be a market for the crazy expensive luxury wines.  Just as Viagra will assuredly keep Porsche and Tiffany's afloat,  reputation and legend will ensure that no Richebourg goes unsold.   But most people, if they were accustomed to routinely buying 50$ bottles, are asking me what's good for under 30$.  Those who used to have a comfort level at 20$ are looking to find something nice at around 12$.  And everyone loves something tasty and interesting that comes in under 10$, out the door.  (I'll politely decline to discuss the drinkers of jug wines here.)

While the Australians may still have the lock on the sub- six dollar bottles (which usually feature some sort of endearing animal and colors one generally associates with 80's beach wear), the days of Australia dominating the "cheap wine" market segment are definitely over.  The Europeans, who have long been drowning in an ocean of the stuff, have finally clued into the fact that, as one of my colleagues in the biz puts it, "the 15$ bottle makes the world go round."  While all the European nations have their rockstars, their prized and princely wines, they also produce a LOT of perfectly drinkable, delicious but not quite earth-shaking wine.  And conversely, Australia has also decided not to stake their entire reputation on being a cheap date; there are some incredible, terroir-focused wines coming from smaller producers that fetch healthy purses.

Spain has been one of the great beneficiaries of this trend.  A lot of wine that previously might not have reached our shores has been aggressively marketed by some enterprising importers and negociants.  Of course, the recession being what it is, a lot of this wine might in other times gone for higher prices; but if your choice is to sell cheap or go out of business, a lot of producers have opted for the cheap route.   And thus the Spaniards have not only eaten Australia's lunch, but beat them up and stole their lunchbox, too. 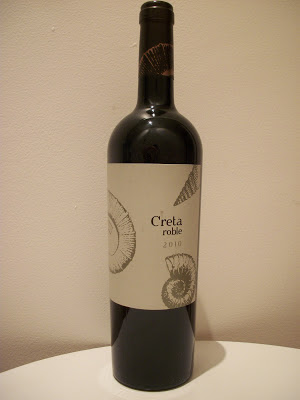 Case in point:  the 2010 Creta Roble.  I purchased this from Costco for eight bucks and change, which means I was out the door with it for less than a Hamilton.  It's a fabulous little wine from Ribera del Duero, imported by Eric Solomon (whose praises I have sung before).   I'll crib from the back label here, but the wine is 100% old vine Tempranillo from the 70 year old "Pago de Cabarroso" vineyard.   This vineyard sits at an elevation of 850 meters on chalky soils, thus the name "Creta" and the marine fossil motif on the label.

It pours a pleasant dark purple into the glass that fades only slightly at the rim, showing both youth and incredible extraction.  There's lots of dark fruit on the nose, and notes of sawdust and oak, giving away the fact that the wine was aged in both French and American oak.  It has a pleasant acidity and solid tannins, that make this a value wine that isn't just a jam-bomb.  But the fruit is there, just restrained, in the typically Spanish style.

I enjoyed this with some seared duck breasts and braised purple cabbage, and it was a quite pleasant dinner companion.  It wasn't austere enough to require food, and for fans of bigger, more structured wines, this could easily be enjoyed alone.   For the money, I'll definitely be buying another bottle of this.
Posted by Unknown at 3:07 PM