A little while back I picked up a boxed gift set of four beers and a glass from Boulevard Brewing Co., an outfit in Kansas City who refer to themselves as "Missouri's second largest brewery."   Their beers are relatively new to the NC market, and I was intrigued by their packaging.   A quick look at the Boulevard website shows that they have a sizeable portfolio, and that the Smokestack series showcases some of their more interesting concoctions.  Most of these beers are sold in 750's, but the boxed set gave me a chance to try several different beers in smaller servings, and had a piece of stemware included.   And while there are pint glasses galore here at Chateau Gilbert, I don't have any good beer glasses.   Of course, it didn't hurt that this set was on the clearance shelf; but don't worry, I checked the best-by dates and all the beers were well within their range of drinkability. 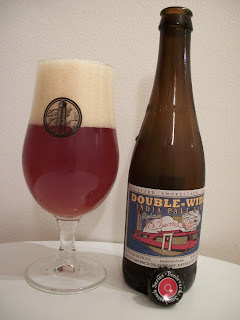 With a massive, rocky head that hangs around, and leaves nice lacing as it drops, the Double-Wide IPA pours a hazy amber into the glass.  It reveals orange-copper highlights when held up to the light.  There is evident yeast deposit at the bottom of the bottle, which results in a bit of turbidity in the beer.
On the nose, there is a whiff of pastry baked with exotic spice, apricot, dry hay and candied orange peel.   On the palate I get orange pith bitterness, and the flavor of copper pennies (or at least what I remember them tasting like when I put them in my mouth as a child).   The bitterness is balanced well by sweet, bready malts that are a nice counterbalance to and support for the hops.  Considering the often overly aggressive hop nature of a lot of IPAs, this one isn't too over the top.  There is a distinct, and unsubtle booziness to this beer, which reveals its 8.5% ABV.  There is a long, lingering finish, which  made me want to have a snack, to dissipate it.  The flavor of the hops almost seems to grow and magnify long after swallowing.   It kind of made me want to have a snack, so I could clear my palate.
Assessment:  Very approachable IPA, and not too in-your-face.  If you're a big hop head, this may be a little on the subtle side for you.  If IPAs aren't really your thing, you might enjoy this as a milder example of the breed.
The Sixth Glass Quadrupel 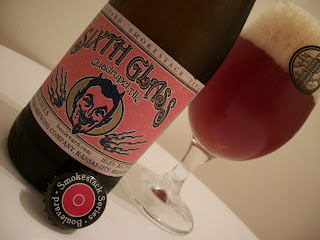 A Belgian style Quadrupel, The Sixth Glass pours a dark copper amber into the glass with a fluffy, khaki head, but it subsides quickly.  Again, the beer has a hazy appearance due to the yeast sediment that has collected in the bottom of the bottle.  Aromas of dried fruits such as dates or figs greet the nose, rising on the vapors of the detectable alcohol.  (At 10.5% you'd have to be a corpse not to detect the alcohol here).
There is a bit of the typical Belgian yeasty funk here, with lots of sticky malts and a hint of Bretty sour on the finish.  It has a deep, earthy roundness, with prominently displayed notes of raisin, fig, date, molasses, and brown sugar.  This beer is all about the malt.  And the booze.  It is very alcoholic, and I know you can't believe that I would say this, but the high alcohol of this beer almost puts it out of whack.
Assesment:  My least favorite of the four.  A little too sticky, and a little too boozy.  But if you're a Belgian Quad fan, pick it up.
Tank 7 Farmhouse Ale 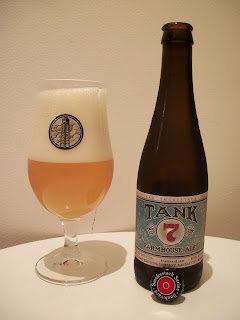 This one is hazy gold in the glass, evincing, once again, its unfiltered nature.  The head is dense and persistent, sticks around forever, and leaves considerable lacing on the way down.   On the nose there is lots of sour fruit, lemon mostly, but also an ample serving of baking spice.  A steady stream of bubbles rise from the base of the glass, like you'd expect from a quality champagne.
There is a pleasant peasant funk here- exactly what you'd expect from a farmhouse style beer.  An easy tartness on the palate lends this a very refreshing feel.  The 8% ABV is less detectable than you would think.  It starts off pretty light, but the beer seems to grow in weight the longer you drink it.  This could be a function of it warming in the glass, or it could just be that the sour element is no longer a surprise, and other elements are making themselves known.
Assessment:  This is a great warm weather beer.  With a slice of orange, it has the potential to be a real porch pounder.  But watch out!  This isn't some low alcohol shandy beer.
Long Strange Trippel 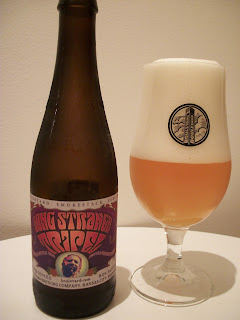 Similar in appearance to the beer above, but with better packaging, the Long Strange Tippel shares  the same lingering and profuse head that all of these beers have.  This is much more balanced than the Farmhouse, with less lemony sourness (although there is a note of that here, no doubt) and a bit of estery funk,
There is a nice, balanced maltiness here, with good funky Brett, and a touch of baked apricot fruit.  Wheaty malts, some spice, and a bit of hoppy citrus dryness.
Assessment:  Eminently drinkable.  A great introduction to Belgian style beers for a novice.  Quite possibly my favorite beer in the pack.
Posted by Unknown at 5:29 PM