The good folks from Victory Brewing Company will be here in Charlotte to showcase some of their wares on Thursday the 21st, and in order whet your appetite, I'm going to do a little review of one of my favorite beers of theirs, the Golden Monkey. 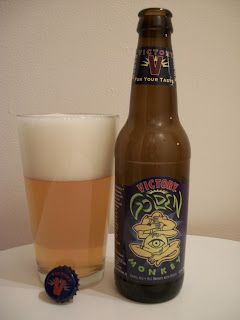 Golden Monkey is a Belgian Tripel style beer.  Slightly hazy and dark hay yellow in appearance, it throws a pillowy bone-white head.  The aroma is classic Belgian tripel territory: yeasty esters of banana and spice, fresh cut hay, maybe just a hint of barnyard (the good kind, if you know what I mean).  There is a sweetness at work on the palate, but also a significant booziness from the 9.5% ABV.   A hop bitterness eases in on the finish, just to kind of pop its head up and wave to you, just to let you know it's there.  What I like about this beer is its drinkability.   Its got flavor, its got character, but it isn't overpowering, it doesn't smack you around.   There is a nice roundness and subtlety to it.