Beer Review: Abita Mardi Gras Bock (Trapped In a Land Where It's Just Another Tuesday...)

Today is always a bit of a sad day for me.  Why?  Because it's Mardi Gras, and I live somewhere that doesn't recognize it as a holiday.  If I was home right now, I'd be in costume, feeling no pain, and partying with everybody else in the Quarter.   This is a time of year that makes me more homesick than any other, and unless you've experienced it, it's really hard to understand what you're missing.  Trying to describe to the uninitiated the way a city throws a whole season of parties, all culminating in one giant celebration that shuts down the entire town is difficult, especially if you're trying to convey to them that it ain't necessarily the way they've seen it portrayed on the news.   Having grown up with Carnival and Mardi Gras being part of the rhythm of your life, and seeing all the fun being had by people in your hometown on the TV, and living in a place where it's Just Another Tuesday, where everyone is just going about their humdrum everyday business, well, I have difficulty putting into words what a downer that can be.

Luckily, even an ex-pat can find some minor comforts of home.   Our local Latino population makes King Cakes (although they're only available on Twelfth Night), I can always whip up some Crawfish Etouffee (frozen tails, but still) and Abita products are widely available here.

Abita Brewing is located in Abita Springs, a small town on the North Shore of Lake Pontchartrain, about 30 minutes outside of New Orleans.   While Dixie Brewing was always the true NOLA beer (operating right there on Tulane Avenue, a short bike ride from one of my old apartments), they unfortunately were seriously damaged by Hurricane Katrina, and have yet to resume production in their historic brewery.   Abita, one of the early regional craft breweries, has stepped into the role of New Orleans Beer Ambassador to the rest of the USA, have inked distribution deals that have increased their national profile, and put their products on shelves in an ever increasing part of the country.  This link will take you to their website, where you can learn more about their offerings.

﻿
Abita has a pretty decent sized portfolio of regular items that appeal to a spectrum of beer drinkers, and a growing roster of seasonal releases.   The one we will talk about today is their Mardi Gras Bock.   I've been drinking this for quite some time,  it's been part of their seasonal lineup for close to 15 years now.  As you can see from this picture from the late 90's, it was a part of our Carnival Celebration even back in the day.  It's easy to spot here because the label is printed in the Mardi Gras Tricolor of purple, gold and green.  But only heaven knows what's in the solo cup I'm holding... 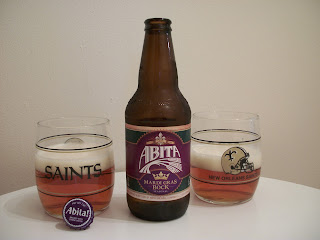 Abita Mardi Gras Bock pours a perfectly clear, bright copper into the glass (and yes, I did have to use my vintage 70's Saints glasses for this photo shoot).  It raises a good head that doesn't stick around for very long, but leaves decent lacing.  It has a light, biscuity nose.  There's a crisp, citrusy hop bitterness to it that counters the weight of the substantial, but not sweet maltiness.   Other than the 6.5% ABV, I'm not so sure what's so bock-y about it.  Perhaps I'm just accustomed to the over the top sweetness of Doppelbocks, and their even higher alcohol.  This was, after all, developed in a time when the craft beer scene was much more limited in scope, and a 6.5% ABV was pretty strong stuff.   It drinks easy, finishes clean and is the type of beer that you can drink multiples of.  In other words, the perfect beer for enjoying at a  Mardi Gras parade.  Well, except for the fact that it doesn't come in cans... 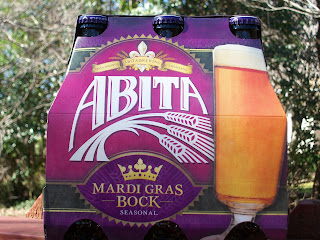 I wish everyone a happy Mardi Gras, whether you're enjoying it in a place that celebrates it or not.  Drink some Abitas, have some Popeyes and a slice of king cake, and keep the nudity where it belongs (in the company of adults, i.e. the Quarter).    Throw Me Something Mister!