I once told a customer "You shouldn't go to your grave without tasting an Amarone."

Amarone della Valopolicella is the most renowned red wine of the Veneto, the upper northeastern region of Italy that contains Venice, wherefrom its name is derived.  I have been known to refer to it as "Sex In A Bottle."

Amarone is at the top of the Valoplicella pyramid, as there are three basic iterations of Valpolicella.  Your basic Valpolicella is a red wine blended primarily from three grapes: Corvina, Rondinella and Molinara.  It is a lighter styled, brightly acidic wine, and inhabits the lower end of the price scale.  An Amarone is at the opposite end; fuller bodied, richer, the acidity toned down and with a much higher price tag.  It is produced by gathering the same grapes that produce a Valpolicella, but then spreading them out on mats of reeds, and allowing them to rasinate, to dry out a bit and shrivel.  It is a process that can take some time, and occurs under cool and ventilated conditions.   The Italians call this process the Passito method, and it is not unique to Amarone; other regions use this method to produce renowned wines from other varietals, too.  This results in a concentration of grape sugars, and is why the price begins to climb: when pressed there is less juice produced per unit of fruit harvested.  But the juice that is produced is intense, high in sugar and densely concentrated.  When fermented to dryness and aged in cask, high alcohol levels are achieved, but the wine has a concentration of flavor that is not found in its simpler brother.

So those are the opposite ends of the Valpolicella spectrum, but what's in the middle?  A wine known as Ripasso is the happy medium.  A Ripasso is made by  taking an ordinary Valpolicella, and pouring it into the same barrels, atop the skins and lees of the Amarone that formerly inhabited the space, and allowing it to age a bit.  This results in a wine that picks up some of the body and richness that is present in a true Amarone, but isn't the same full on bombshell of wine sexiness.  It also comes in at a happy medium of a price, and can be a good compromise for someone who wants a bottle that is still rich and satisfying, but doesn't have a premium price tag. 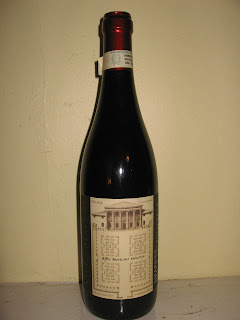 The reason I just gave you a longwinded lesson on the three tiers of Valpolicella is so that you might have a bit of background to appreciate what I'm going to tell you about this incredible wine I was fortunate enough to drink the other night.  One day I'll get around to reviewing the lesser styles, but for our first trip to the Veneto, I figured I'd just start with the good stuff.

I had some nice filets mignons lying around, and here at Chateau Gilbert we prize a good Sunday Night Dinner.   I also had a bottle of the 2007 Villa Maffei  Amarone just hanging around, and I decided that a great piece of steak deserved a great bottle of wine.  (In case you are my employer and happen to be reading this, no, you aren't paying me too much, I can explain, really!)  I wrapped the filets in bacon, seared them off in a cast iron skillet and finished them in the oven, and served them with some gnocchi that I browned with a little beurre noisette, some button mushrooms and topped with just a smidge of truffle oil.

This bottle comes in at $39.99, and in the grand scheme of things is an entry-level Amarone.   They are out there at lower prices, but it is also not uncommon to find them climbing into much higher altitudes of spendiness.   It poured attractively ruby into the glass, evincing almost none of the browning that you might see in a wine with some age.

Where it really began to shine, however, was on the nose.  Whoa!  Where to begin?  This wine is highly aromatic, with lots of fruit notes coming up immediately.  What I first noticed were all the aromas of dried fruits: fig and plum, almost fruitcakey in their nature.  But also a bit of woodsiness, something more exotic than just cedar or oak, and some floral elements, maybe violets?

On the palate, this wine exhibited the heady alcohol warmth that you would expect of a bottle that registers 15% ABV.   There is fruit to spare, and no lack of acidity either.  A body that has firmness without being heavy, flesh without flab.   Firm tannins reinforce the supple texture, giving the fruit elements some structure, and allowing it to pair wonderfully with the beef.  The savory umami of truffle, potato and  mushroom gave the wine another wavelength to harmoniously riff on.

Assessment?  Sexy, Baby, Sexy!  This is a big, round and well-endowed Betty Page of a wine.  Supple, curvy, fun AND sophisticated.  Bright, savory, as balanced as an Olympic gymnast.  Forty bucks well spent.  This is rich and lovely, no other way to say it.   An absolute pleasure.
Posted by Unknown at 7:59 PM