As a New Orleans Native, I can tell you that there are few true New Orleans culinary experiences to be found 100 miles outside of the city.

Despite its influence on the creation of the "celebrity chef" as we now know it (Mr. Prudhomme and Mr. Lagasse, call your offices), regardless of the way it has changed the palate of America over the last 30 years by exporting the bounty of its waters, the staff of its kitchens, or the spices it uses to accent its dishes, it is difficult to find a cuisine so distorted from its true nature so close to its point of origin.  As one of the nation's true regional cuisines, you might think that amidst all the acolytes of and advocates for the city that lies at the intersection of Cajun and Creole, good Louisiana food would be easy to find, right?

Well, not really.  Unfortunately, finding a TRUE New Orleans culinary experience can be a difficult search.  Now, I know this is a statement that has the potential to earn me some enemies.  And maybe I'm being ethnocentric, maybe I'm being a snob, maybe I'm just homesick.  But how many people do you know who lived in NYC who bitch and moan about not being able to find a decent slice of pizza?  Or people who grew up in Philadelphia and speak with a mixture of longing and disdain when the subject of Cheesesteak arises?  Clam Chowdah and Bostonians, anyone?

Well, one of the establishments that has done a great job of exporting New Orleans flavor to the greater world is Popeye's Fried Chicken (or whatever it is exactly they're calling themselves these days).  And it may strike you as odd to see me trumpeting the virtues of a fast food conglomerate here in a blog that is devoted to epicurean delights.   And it is a sad state of affairs when a multi-million dollar franchise chain is one of the most reliably New Orleans food experiences outside of New Orleans.  I realize this will take some explaining.   I can hear y'all asking now:  What's so special about Popeye's?   When did fried chicken become a staple of New Orleans cuisine?  How does a multinational fast food chain qualify as a New Orleans culinary ambassador?  What happened to gumbo, red beans and rice and blackened redfish?

﻿﻿
Popeye's Fried Chicken was founded by a man named Al Copeland in 1972 in Arabi, a community just over the Parish line from New Orleans' 9th Ward.   Over the next 20 years, his fried chicken empire grew and grew, expanding into markets across the nation and globe, making him the ultimate example of hometown boy done good.  And through it all, the ups, downs, ex-wives, plastic surgeries, he kept his Yat charm.  He was known for the type of flamboyance unique to rags-to-riches types, and he had a panache, a spiciness, if you will, that was uniquely New Orleanian.  When he died a few years ago, it was from cancer.   Of the salivary glands.   Who dies from that?  A man who made a city's mouth collectively water for over 30 years, that's who.   Furthermore, as best I can tell, Popeye's was responsible for introducing the venerable Spork to most Americans.

His chicken was a staple of the city's food landscape, humble but omnipresent, and universally loved.  It wasn't haute cuisine, it wasn't the apex of New Orleans culinary aspiration, but like Al himself, it never pretended to be.  It was just damn good chicken, done in a way no one had ever done it before.  I've attended many a church dinner, birthday celebration, hell, even the employee picnic of one of the city's best fine dining restaurants, where boxes of Popeye's  were the center of attention.  No family Mardi Gras spread was complete without a box, leading my father to famously quote "More chickens die for Mardi Gras in New Orleans than Turkeys do for Thanksgiving."  Their TV commercials were of a sort of highly localized advertising that you just don't come across anymore, featuring local cultural luminaries and local accents.   Here's one from 1983 featuring Dr. John doing the voice over and jingle in all his yatty glory. How about one featuring Fats Domino, perhaps?  Here's a really early one, from '79.    For years during my childhood there was a Saturday morning show called "Popeye and Pals," hosted by the local UHF channel (yeah, I'm showing my age here) that featured children  eating their own 3 piece combo, watching cartoons of the sort that nobody televises anymore and washing it all down with Big Shot red drank.  It is one of my great childhood regrets that I was never a guest on Popeye and Pals.  :(

When we moved to Charlotte, NC in 2005, it was to our great displeasure that we learned that there are no Popeye's here.  The local fried chicken chain here is Bojangles, and they have a passable product.  When I get the craving for fast-food fried chicken, it'll "git 'r done" as they famously like to say in these parts.  But it ain't no Popeye's, lemme tell you that.  As if to illustrate my previous point about the misinterpretation of Louisiana food outside its borders, they have a side dish on their menu called "Cajun Pintos."  What is Cajun about pinto beans?

Thus, for years we lived without Popeye's Fried Chicken.   There was one in the Atlanta airport, so if we had the layover time, we always grabbed some for lunch.  When we would go home on visits, there was one right up the street from my Mother-In-Law's house, and was always the first stop on the way to her place from the airport. 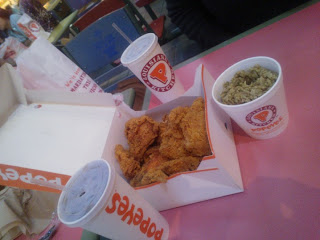 But I have good news.  We discovered that one has opened in the food court of Concord Mills, a supermall on the northern outskirts of Charlotte.  We have also for a couple of years heard of one somewhere, mythically almost, up the road on I-85 between Charlotte and Greensboro.  I can now confirm its existence; it is in a gas station right on the other side of the Interstate from the Red Oak brewery.  Today, after driving up to Greensboro to see the Cone Sisters exhibit at the Nasher Museum of Art on the Duke University campus, we saw the sign from the highway.  While we enjoyed the wonderful exhibit of  Matisse, Van Gogh, Picasso and others, we were truly pleased to finally discover this rumored-of Popeye's tucked in, right off of the Interstate.  It inspired us to stop at Concord Mills on the way home and have an early dinner of fried chicken.   One 8 piece box, a side of dirty rice, and two Cokes, coming right up!  (Sadly, there was no Red Drank available).

I'm so happy to have one of the small comforts of home here in my adopted city, even if I do have to fight my way through a food court full of overly made up, fashion obsessed teens to buy it.   And while I may be eating a small handfull of antiacids tonight, I can say that it is definitely worth it; I'll just think of it as the warm glow of home.