As many of you know, I took advantage of my advantage and acquired one of the coveted "bricks" of Westvleteren XII when they went on sale on 12-12-12.   Having survived another year of Holiday Madness working in Beverage Retail, I decided that a little reward was in order for my day of rest, and figured the Monks would approve of me kicking off my Christmas celebration with a bottle of their beer.

On Christmas Eve I put a bottle in the fridge to chill overnight, and pulled it out a good 20 minutes before opening to come up to proper serving temperature.  I admit that it was hard to wait, so I polished up the two glasses that came in the package, and got the camera ready.  When the moment was right, with all the respect and suspense I could muster, I gently opened the bottle and poured it into the two goblets. 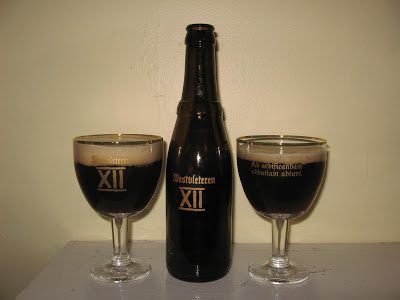 Westvleteren XII poured chunkily into the glass (yes, I could see little clumps of sedimented yeast dropping out of the neck of the bottle) and produced a creamy tan head atop a cloudy, medium brown body.   The 33cl bottle filled the two little goblets perfectly.  It had a mild nose, with some floral and citrus aromas backed by a hint of earth. The carbonation was delicate and prickly, and the head left decent lacing, but had good retention.

As I tasted it, I was amazed by how complex this beer was.  Up front there is a sour/tart component reminiscent of citrus peel, but the maltiness of the beer comes in mid-palate with nutty, sweet biscuity tones, and something that reminds me of salted caramel.   It had a medium body and a finish that just refused to quit.  The substantial alcohol content of 10.2%  gave the beer a warming note, and was much more noticeable as I enjoyed my glass, and it came up in temperature.  The bottle suggests a serving temperature of between 12-18 degrees Centigrade (53-61 for those of us who deal in Fahrenheit), and I'm not quite sure I got it right; next time I'll break out a thermometer.  The earthy notes of this beer came through stronger and stronger as I got closer to the yeast at the bottom of the glass.  I'm not sure if this is an effect of getting more of the yeast in each sip, or the warming of the beer.

This beer definitely evokes the Flemish countryside that I love (which I find far superior to the bustle and modernity  of Brussels).  I could see myself enjoying this while seated at a rough-hewn wooden table in a dim old tavern, a roaring fire in the hearth, muddy-pawed dogs patrolling the floor for scraps, a heaping plate of  radishes, coarse bread and stinky, runny cheese set next to a bowl of steaming stewed rabbit.

We all know the legend of this beer, its status among beer aficionados, the mythology and reputation that surround it like an itchy robe.  But the "Best Beer In The World?"  Mmmmnn, wellll, I don't know if I would go that far.  I certainly enjoyed it.  I think that it is certainly a top contender.  As I tasted it the word that kept running through my mind like a prayer was "delicate."  It has a beautiful complexity and delicacy, and a rusticality that evokes its origins.  If I had no idea of what its story was, and you told me "Hey, you know this beer is made by monks out in the sticks in Flanders?"  I would probably say "Hmmn.  Tastes like it."

The profits generated by the sale of this beer go towards preserving and improving a place of worship and religious reflection, which is a good thing, regardless of your personal religious views or level of observance.  By buying this beer, you help to build the abbey.  Don't beleive me?  It says so right there on the bottle in Latin:  "Ad aedificandam abbatiam adiuvi."

While the considerable price tag was at first a bit tough to swallow, I had to drop the coin on this, and I'm glad I did.  First off, it's good beer.  Second, it's a neat piece of history.  Third, when I consider how many times I've paid $12 for a glass of wine or a cocktail in a restaurant bar, or just thrown money at a good looking bartender with a twinkle in her eye and a great... ahem, ...gregarious demeanor, paying $15 for a bottle of beer I would otherwise have to travel to Belgium to obtain really isn't that outrageous.  Would I take vows of celibacy, poverty and silence just so I could enjoy an uninterrupted lifetime supply of this beer?  Would I spend my day wearing itchy, homespun robes, immersed in prayer for it?   I think we all know the answer to that.

Assessment: A great beer, a true achievement in complexity of flavor, and a marketing buzz that can only be acheived by the paradoxical unwillingness to sell your product.  I'm not sure I would spend this kind of money on this if it were consistently available.  In fact, I can say I wouldn't.   Good as it was, the heavens didn't open for me, I didn't have ecclesiactical visions, I wasn't suddenly a master of Kung-Fu (whoops, sorry, wrong monks again).   I bought it, like most everybody else, because of its rarity.  As it has a "best by" stamp on the bottle cap of 2015, it will be interesting to enjoy the other five bottles over the next two years, and to see how the character evolves.
Posted by Unknown at 7:46 PM