As the Holiday season gets into its final frenzied throes of disgusting consumerist orgiastic greed and materialism, we all need a drink.  After a lifetime of working the service sector, be it retail or restaurant, the Xmas season (and trust me,  XMAS is a four letter word around here) has no real magic for me.  In fact, the only thing I want for Christmas is for it all to be over with.  People vacillate between being nice and cheerful and filled with the spirit that would make Charles Dickens beam,  and being nasty, impatient and selfish.  And you never know who will be who.  It's like emotional roulette, and trust me, sometimes your marble lands on the Double Zero of holiday ugliness.  So pardon me if, to borrow a phrase from a friend, I'm not "burping Christmas carols and farting glitter all season long."

Ok, now that I have that out of the way, I'm here to talk about Christmas seasonal beers.

Into this swirling vortex of money, family pressure and insidious tradition, brewers have decided to capitalize on the ease with which you open your wallet by injecting a bewildering array of Winter and Christmas themed beers.   You'll see winter warmers, bottles with Sandy Claws on them, elves, lumps of coal, lots of beer with the word "snow" worked into the title, you name it.   But today we will review two that represent the yin and yang of Christmas:  Southern Tier's Krampus and Ho!Ho! from Diamond Knot.

Why these two?  Well, Ho!Ho! is an obvious reference to the Fat Man, The Man With The Bag, The Jolly Old Elf, St, Nick, aka Santa Claus, and he needs no introduction.  But Krampus, well, he's a part of the Christmas mythology that the Victorian shopkeepers responsible for the style of Christmas we practice today politely excised from the pantheon.  Among the Germanic peoples (especially the ones along the mountainous border with Austria), Krampus represents the other side of the coin of St. Nick.  While Santa brings toys and goodies to the well behaved children, Krampus is his horned, hairy enforcer.  The bad children are rounded up by Krampus, beaten with switches, and in some cases put into a burlap sack and thrown in the river.  All of a sudden the naughty and nice list has some teeth now, doesn't it?  I'll bet there are some parents out there reading this right now  who are thinking of maybe reviving this honored old Germanic bad guy and giving him a seat at the table of Christmastime characters (it's ok, you can admit it).  "Elf On The Shelf, my ass.  Honey, next year we're bringing back Krampus." 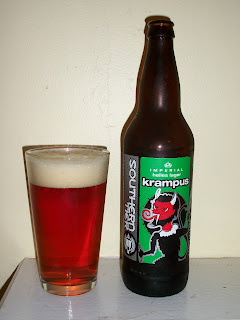 Krampus is an Imperial Helles Lager (a little nod to his Germanic roots), comes in a 22oz bomber, retails for $6.99, and has an ABV of 9%.   It pours an orange-copper with good clarity, has active carbonation and gives an ample, rocky head that subsides quickly, leaving decent lacing.    This beer has a light-to-medium body, and don't serve it too cold, because it has significant maltiness that will only show up when it approaches "proper" serving temperature.   The citrusy, piney notes of hops do combat with the bready, biscuity malt character.

This is a very straightforward brew.  There is an earthiness to it, a deeply masked malt sweetness, and lots and lots of hops.  Finishes clean and powerful.  Don't drink it on an empty stomach, as the high ABV will leave you feeling like Krampus hit you with his stick.


Here's a little song about Krampus that should make its way into your roster of Holiday traditions. 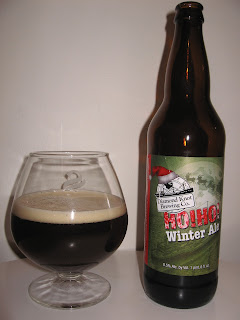 The Ho!Ho! Winter Ale from Diamond Knot is a little more traditional of a winter seasonal.   Also packaged in a 22oz bomber, it has an ABV of  8.5% and retails for $4.99.  It pours a nice chestnut brown in the snifter, but has an unimpressive head that disappears rapidly, and leaves only the faintest lacing.  The aroma is faint, but has decent prickly carbonation.   On the palate, there is good complexity; roasted nuts, pie spices and herbaceous hop notes do a jolly dance across the tongue.   The finish is hop driven and lingers.  The significant alcohol is well hidden by sweet malts and 60 IBU's of hop bitterness, but is sneaky, so don't drink too many of these and expect to stay up waiting to see Santa slide down the chimney.  However, one of these and a plate of pecan sandies could possibly dissuade the Fat Man from leaving you a lump of coal.

Assessment: Both are good beers, but the Ho!Ho! is probably the more traditional of the two, and more evocative of what the general public is looking for when it comes to a Christmastime winter seasonal.  Both have a good balance of malts and hops, but the Krampus is definitely more aggressive hopwise, and Ho!Ho! wins the match on dark malts.  Personally, I rule in favor of Krampus.  Mostly because it is atypical for an Xmas beer, has a more aggressive demeanor, and well, to be perfectly honest about it all, it doesn't have a  Santa hat on the label.  Maybe I'm cheering for the villain here, but the Scroogey Grinch in me picks Krampus over Sandy Claws everytime.

And with that, I leave you with this:  your Xmas LOL moment of the day, the Peanuts Gang updating their Xmas musical number.