When we bought Chateau Gilbert a few years back, we learned that the previous owners had been rather active gardeners.  Every season of the year we have something in bloom, be it roses, lillies, irises or dogwood or cherry trees.  In the spring an army of daffodils marches through our modest suburban lot.  However, the only thing edible was a humongous fig tree that provides us with a fig crop of biblical proportions late every summer.   So, naturally, I got a little bit of the gardening bug myself.  Unlike the previous owners, I wanted  some edibles, because, let's face it, I've got the ornamentals covered.

So, in addition to the vegetable beds I put in (and that's a post for another time), I have also planted some fruit trees, two peach and two pomegranate.  Did you know that you can grow pomegranates in North Carolina?  Me neither.

This is the second year we have had them in the ground, and the first that they have produced any fruit.  Well, one of them did.  The other, while leafy and clearly flourishing, yielded nothing.  The one that was productive, gave me exactly four pomegranates.  I suppose this is not bad for only the second year.  They seemed rather small and leathery, and afflicted with spots, but when opened, gave us lovely albeit pale fruit.  The seed themselves were extremely tart, almost lemony.

Mrs. Gilbert was at our local megalomart and found a flat of 6 pomegranates for the ridiculous low price of 6 bucks, and promptly threw them in her cart along with a giant jug of detergent, two sides of farm-raised steelhead and several other odds and ends.  When she got home, we opened one of the California pomegranates and one of our own and had a taste test.  Here they are, side by side: 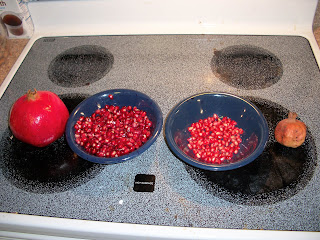 As you can see, the commercially raised fruit absolutely dwarfs the homegrown in size, and has a much lovelier complexion.  This picture only begins to capture the difference in the color of the seeds.  The commercial fruit was much, much darker, possessing that blood dark hue of purple/red, and the seeds were also plumper.  I have already mentioned how different the flavors were.

Our solution?  Mix the two together.  Like blending grapes from Bordeaux, we added some acidity to the mix, while preserving the overall deeply sweet and robust fruit character.  Well, not really.  But hell, this is a wine blog, so I had to throw SOMETHING wine related into this post.  Anyway, considering the price of commercial pomegranates and what it cost me for two trees, it may take some time for this investment to pay off.   Let's see what next year brings.
Posted by Unknown at 6:45 PM