Evil Twin is a beer company that was founded in Denmark, but has relocated to Brooklyn, New York.  A contract brewery, they have their beers produced by 10 different breweries in six different countries.  They are generating a lot of buzz in the beer world, making small-batch, tough to find concoctions.  As we all know, rarity translates to desirability, especially considering the constant one-upsmanship so prevalent among beer aficionados.  I was recently given a 12oz bottle to sample, so I figured I'd take a moment to tell you all about it, and to do a little gloating too. 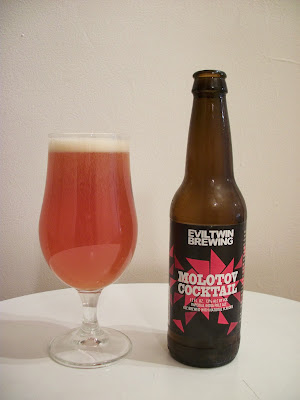 First off, I love the name.  A beer named after one of the world's most famous improvised explosives?  Count me in.  And it's an appropriate name, too.  This beer clocks in at a near unbelievable 13% ABV.   That's as strong as most wine; a 12oz bottle has more alcoholic punch than two bottles of normal beer, so be careful, kids.  I drank this on an empty stomach, slowly, and felt a noticeable buzz by the time I finished it.  This is definitely a sippin' beer, not something you are going to crush by the multiples while tailgating.  The label designates it as an Imperial IPA, "brewed with natural flavors," but nowhere on the packaging does it identify said natural flavors.  I can only guess what the adjuncts are.

It pours a hazy orange into the glass and has a finely beaded, yet thin head which recedes a bit leaving spotty lacing.   The nose is complex, with aromas of sweet citrus (think Tangerine or Satsuma), some cereal notes, and what I imagine a freshly harvested wheat field must smell like.  There is also a noticeable scent of booziness.

I suggest bracing yourself for the first sip.  Mrs. Gilbert reached over and took a big gulp of this, without having any idea of what to expect, and, well, let's just say she was completely taken by surprise.  There are big, big hop notes here, but the brewers have obviously used so much malt to achieve the stratospheric ABV that there is an almost cloying sweetness to it.  It is sticky sweet, but that is balanced by the very drying effect of the hops.  Where most IPAs have that citrus pith bitterness to them, this has more flavors of citrus flesh; more Florida orange or tangerine than grapefruit.  And of course, running through it all like a vein of fire is the booziness.  The finish is lingering, mouthcoatingly sticky, as the considerable malt content glues itself to your lips.  This is not a beer I'd recommend drinking if you have an impressive moustache.

In the end, I don't really know what to say about this beer.   Is this a novelty beer?  Well, it certainly is in danger of being perceived as such, considering the name and ABV, but it is extremely well crafted.   I have to caution that it is a beer for which you will need to be prepared to get a bit outside of your comfort zone.  It is definitely a sippin' beer, and for me a "one and done."  I'd recommend that everyone who gets the chance should try it, but I know that there will be a lot of people who will only drink it once, check the box, and never drink it again.  On the other hand, I know some people who will freak out and feel that this is the best thing to ever come in a bottle.  But one thing is for sure: this is a pitbull of a beer, a big brew in a small package.  Buckle your seatbelt.
Posted by Unknown at 10:44 AM