I have recently been drinking a lot of wine that has come in at a rather modest price point, as I've been trying to watch my wallet.  We all know how easy it is to let the wine budget get a little bit out of control.   But I recently decided to reach into my cellar and pull out something a little nicer than average. 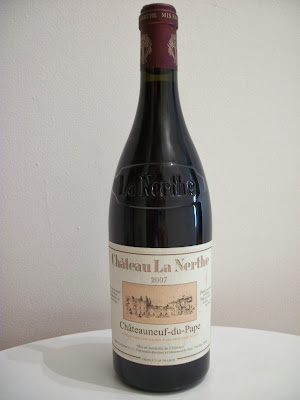 What came out was a 2007 Chateau La Nerthe Chateauneuf du Pape.  I picked this bottle up for about $40 sometime last year.  I have a bottle of the 2009 squirrelled away, but I wanted to try the more mature bottle first.   If you're  a longtime reader, you'll know that my love of Rhone Valley wines is no secret.  I had the good fortune to travel there in the summer of 2012.   I have long championed the region as one of the top price to value AOCs in France; you will pay less for a top rated wine from the Southern Rhone than for a similarly rated wine from other heavy-hitter areas in France.   Of course, it's also just a style I really enjoy, and I find the GSM wines of the Southern Rhone to be some of the most friendly and versatile wines in the world.

One of the neat things about the Chateauneuf du Pape AOC is that 13 grape varieties, red and white,  are permitted for use.  The big players (in the red wines, at least) are Grenache, Syrah, Mourvedre and Cinsault.  Curiously, Carignan, one of the main players in other, neighboring, sub-regions of the Southern Rhone, is not permitted for use in Chateauneuf du Pape.  ( I always remember this with a little mnemonic: "There is no carrying on in the Pope's house.")   Because winemakers are given such a wide latitude with permitted varieties, CDP and the Cotes du Rhone in general are a blender's paradise.  Wines differ from Chateau to Chateau and often from vintage to vintage.  Of course, there are broad similarities across the region, but each producer's wine is unique.

The 2007 Chateau La Nerthe is composed of 48% Grenache, 29% Syrah, 22% Mourvedre, and a lonely 1% of Cinsault.  Characteristic of a hot weather clime, it clocks at 14.5% ABV.  It pours an opaque ruby into the glass, and turns to garnet at the rim, evidencing just a bit of age.  The nose is reasonably powerful, jumping out of the glass at you, probably helped aloft by the high alcohol content.   There are scents of cooked red fruits, oak and exotic spice.  At first taste, this wine showed powerful tannins, almost uncharacteristically strong for a wine from this region (the hand of the winemaker at work?), but they did relax considerably as the wine opened up.  Still, this is a Chateauneuf du Pape that weighs in on the brawnier, more muscular side.  Opulent and heady with flavors of tobacco, hoisin, and cooked dark cherries, this wine shows great complexity, and works its magic slowly.   There is enough acidity to keep it lively, but it is the deft grace of a middleweight boxer: spice and tannin that are the stars of the show here.  Fruit characteristics, while present, are not at the forefront.

I wonder how this wine will do with a few more years of aging.  I know that I may not be in agreement with everyone on this point, but I've always considered Chateauneufs to be wine enjoyed while still on the more youthful side.   I've been disappointed more than once by slightly over-the-hill wines from the Southern Rhone, and I was afraid that this wine was getting near the pivot point where things begin to decline.  However, I think this Chateau may be what changes my mind on that subject.  The structure here makes me think this could easily survive several more years of storage.  I think  a little more age will mellow the tannins and contribute to this wine's savory character.   I'm still very much an amateur at studying the intersection of wine and time.  It's something that really takes practice.  And again, it may just be that this wine will merit more cellaring.  A CDP from another producer may not.

This wine would be a great accompaniment for more robustly flavored dishes, notably beef or lamb.   It strikes me a cool-weather wine, as well.  I can envision myself enjoying this on the deck on an autumn evening, a piping hot dish of Oeufs en Meurette in my hands, watching the leaves fall.
Posted by Unknown at 3:08 PM