One of the frustrating paradoxes of the ongoing craft beer revolution is that while a staggering number of new breweries are opening every year, many of them have very limited distribution.  Thus, despite the ever widening choices available to the beer consumer, many beers are unavailable in any given market.   Because beer (and wine) distribution is a VERY localized phenomenon, what is available in your market depends on what your market's distributors are interested in carrying in their portfolios.   Working on the retail side, I have a lot of conversations that go a little something like this:

CUSTOMER:  "Hey, I was in East Overshoe last week on business, and I stopped at this little restaurant and they had Pig Vomit IPA on tap.  It's made by Exploding Watermelon Brewing.  It was delicious.  Do you carry that here?"

GILBERT:  "Hmmn.  I've never heard of that.  Let's look it up."  (Taps on computer, finds nothing).  "No, I'm sorry, I don't have a listing for Pig Vomit IPA."  (Turns to co-worker)   "Hey, Rondel, ever hear of Pig Vomit IPA, from Exploding Watermelon Brewing in East Overshoe?"

RONDEL:  "Yeah, we can't get that.  They don't distribute it east of the Mississippi."

GILBERT:  "Sorry, sir.  It isn't distributed in our market."

CUSTOMER:  "Well, can you special order it for me?"

GILBERT:  "No, sir.  It doesn't work that way.  You might be able to buy some online and have it shipped to your residence, because North Carolina does allow direct to consumer sales, but the shipping may be a bit cost prohibitive for a six pack.  You can make friends with some guys in a beer aficionado group on the internet and do a swap, where they send you stuff you can't buy in your market and you send back stuff they can't find in theirs.  But I can't get it unless a distributor here in Mecklenburg County decides to pick up the brand for distribution.  Maybe if you (and lots of your friends) call one of our area beer and wine distributing companies, and convince them to pick up the Exploding Watermelon product line, I can get you some Pig Vomit IPA."


And so it goes.  I am constantly asked by my customers if I have this or that beer that they enjoyed in this or that part of the country (and it isn't just beer; wine follows the same model, with some additional wrinkles that I won't go into here, such as private labels and the dreaded Restaurant Only allocation).   Invariably the beers they are seeking are from the smaller entities in the craft beer world, and often from areas far away from the tiny hamlet of Charlotte, NC.   It's a problem that perpetually vexes my readers in other parts of the country, who wish to try something that I've reviewed.   Distribution is the major hurdle that must be leaped by craft brewers of any size.  Part of the impetus behind Sierra Nevada and New Belgium opening breweries in North Carolina is so they can better reach markets east of the Mississippi. 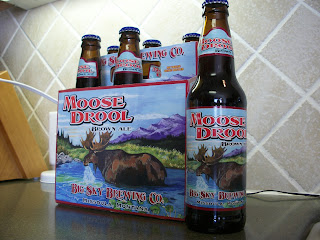 Few examples illustrate this as perfectly as Moose Drool from Big Sky Brewing Co. in Missoula, Montana.  This is a beer I am perpetually asked about.  And they quite literally don't distribute it east of the Mississippi.  If you go to their website and go to the FIND BEER page, you can click on any state in the eastern side of the US and see that they have yet to expand into half the country.   So on my recent journey to Dallas, Texas I was pleased to find the elusive, much asked about and humorously named Moose Drool.

I wasn't sure what to expect from this beer, as I didn't know anything about it other than my inability to buy it, and was pleased to find that it was a brown ale, pretty much my favorite style of beer.  Moose Drool pours a clear reddish dark brown into the glass, and throws an ample beige head which subsides rapidly but leaves a nice bit of lace behind as you drink it. 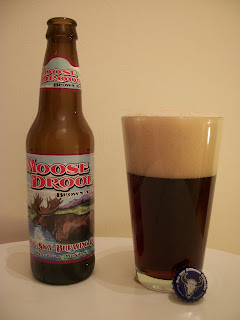 There's a faint hint of caramel on the nose and just a touch of something botanically sweet, sassafrass maybe, that makes me think of root beer.  On the palate, malts dominate, giving this beer a nice richness and viscosity, but there are enough hops in the mix to keep it balanced, and give it a dry finish.  Almost-burnt pecan, weak Yankee coffee and toast come to mind.  But the bittering hops linger on at the end, and give this beer a persistence in the mouth that keeps going even well after you've swallowed it.

Assessment?  I could drink this beer all day.  Literally.  A modest 5.1% ABV brings this brew back down, out of the realm of the high gravity powerhouses we've become accustomed to in the craft beer world, and into the world of the everyday.   Add to that the approachability of the style (no single element dominating any other), it's substantiality that doesn't veer towards heaviness, its balanced hopping, and its downright pleasant flavor and you've got, at least for me, a real winner.

This could aslo be a great crossover beer for a lot of your friends: for the guys who drink American pale lagers who want something a bit thicker, or for your stout friends who want something  a little bit stepped down.  The company's motto is "Making water fun!" and they certainly accomplish that.   Anybody who prints on their packaging "HOLD MY BEER AND WATCH THIS!" Is instantly OK with me! 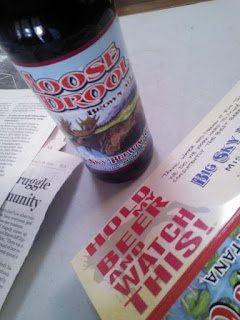 Time for a road trip everybody!