There's been a lot going on at Chateau Gilbert lately, and I'd like to apologize to everyone about the lack of recent posts.  I'm in the middle of the Holiday Insanity at work, and I have been in mourning for a very dear and old friend who succumbed to cancer recently.   I've been going a bit heavy on the beer reviews lately, and that is partly because there are so many seasonal beer releases this time of year.  So tonight I have decided to get back to what this blog was originally intended for, and that is wine.  Now, I've only reviewed one white wine on this blog so far, and I reckon that's kinda unbalanced, so tonight I selected an Alsatian white blend that has been a favorite of mine since I discovered it a couple of years ago. 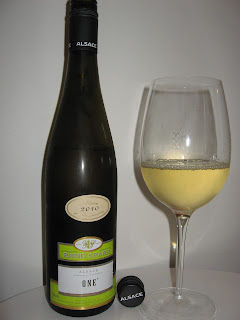 Alsace is a region in France that is nestled up against the Vosges mountains, which separates them from the rest of France, and is to the west of the river Rhine, which demarcates the German border.  This has historically proved to be an unfortunate situation for the Alsatians: every time the Germans and the French declare a war, this region gets swapped back and forth, depending on who the victors are.  It is currently (and hopefully for the foreseeable future) French.

But there is an awful lot of cultural cross-pollination going on in this area.  In addition to the obvious Franco-Germanic dynamic, this area was settled by people from all over Central Europe in the aftermath of the Thirty Years War.  Lured to the devastated and depopulated province by Louis XIV with the promise of free land for those hardy enough to restore it to productivity, this became a mini melting pot of European ethnicities.

This cultural diversity is evident in the cuisine of the area, as well as in its winemaking traditions.  You will find choucroute and charcuterie a dominant force in the province's gastronomy.  Also, you will find grapes that we traditionally associate with Germany being grown (Riesling and Gewurtztraminer, most notably), but vinified in a totally different style, and then packaged in German looking bottles.  Yeah, it's a mess.  But French food in German portions?  They're definitely doing THAT right.

Most Alsatian wines are composed of a single varietal, and this region of France stands alone in allowing its AOC wines to be labelled thusly.  Blends are a rarity, and are often identified as Edelzwicker (even though this designation appears nowhere on the bottle that my diminishing eyesight can tell).  This wine is a blend of 40% Muscat, 40% Riesling and 20% Pinot Gris, but is vinified almost to dryness.

It has a light lemon tinge to the color, and throws off subtle aromas of  blossom and citrus peel.  It has tight, tight acidity with only the barest perceptible sweetness to it, hiding far in the background, revealing itself as the flavor you might associate with a crunchy, unripe peach.  The floral note comes in again on the finish.

While not incredibly complex, this is a great quaffing wine, and is also superb for dishes containing seafood or high levels of spice;  the acid will compliment anything that started its life in the sea, or will help scrub the fire from your tongue in case your Thai mother-in-law wants to see what you're made of.   Of course, it would pair beautifully with a dish from its own terroir.  A heaping plate of Choucroute de la Mer would work just fine. 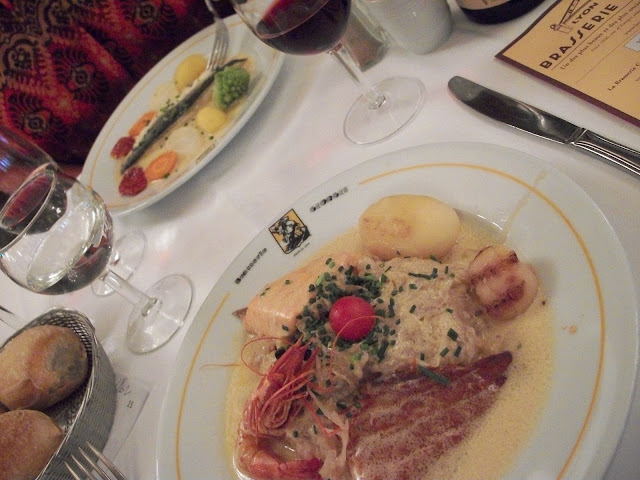 The famous Choucroute de la Mer at Brasserie Georges, in Lyon
Posted by Unknown at 7:23 PM