﻿﻿﻿
Tonight's selection hails from Gigondas, a village/AOC in the southern Rhone.   The Amadieu family has been making wines in this corner of France since 1929, and have a catalog of several Rhone AOC's, including Vacqueyras, Gigondas and plain ol' Cotes du Rhone.  While 2008 was considered a less than stellar vintage for this part of France, thanks to modern winegrowing and vinification techniques, good wines may still be made in poor years.  Our selection this evening proves that hypothesis.

Gigondas is located to the north and east of its more famous cousin, Chateauneuf-du-Pape, and its wines are often unfairly compared with those of its nobler neighbor.   I find them to be more rustic, and a bit more earthy than the elegant juice of The Pope's New Castle.  But that's not a bad thing.  Quite the contrary.  They are different wines, different terroirs, and though the grapes are often of the same breed (GSM, et al), they have different pedigrees.   Tonight's selection is composed of 80% Grenache and 20% Syrah.

This wine pours a medium ruby in the glass.  It takes a while to open; despite allowing it a chance to breathe, it started off a bit tight.  The label says that it is best enjoyed within four to eight years of vintage, and so may perhaps be a bit on the young side.   Medium bodied, the first thing one notices are the significant tannins on the palate, and a hint of plum, perhaps cassis on the nose.  The fruit notes in this wine are quite subdued, both in its bouquet and flavor.  Where it really excels is in its savory notes.

﻿ Leather, game meat, tobacco and earth dominate any notes of fruit present on the palate here.  And I must stress, that is not a condemnation.   This is, above all, a masculine wine, and largely defined by what it is not.  It is not plush, but rather, powerful and robust.  It is not austere, but really more conservative.  Not flashy, but elegant.  If  it were a movie star, it would be more  Robert Mitchum than Clark Gable; suave, debonair, well-groomed and confident, to be sure, but a bit more rough-and-tumble and with a touch of the farm and field.  City slicker it ain't.  Think Hemingway, not Fitzgerald.
﻿﻿﻿﻿﻿﻿﻿﻿﻿﻿﻿﻿﻿﻿﻿﻿﻿﻿﻿﻿﻿﻿﻿﻿﻿﻿﻿﻿﻿﻿﻿﻿﻿﻿﻿﻿﻿﻿﻿﻿﻿﻿
﻿﻿﻿﻿ 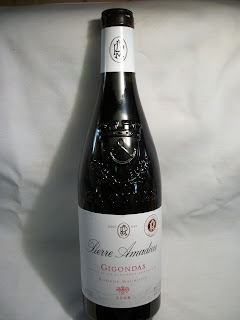 But, enough with the bad analogies.  Despite the restrained fruit, this wine has a fantastic balance of tannin and acidity, and has a lingering finish.  Strong, savory notes dominate, making this an excellent alternative to Cabernet Sauvignon for a meal containing red meat.  You can pick this up at Total Wine for $19.99 while it's still on sale.   After December 2, be prepared to pay a few bucks more.  ﻿﻿﻿﻿﻿﻿﻿﻿﻿﻿﻿﻿﻿﻿﻿